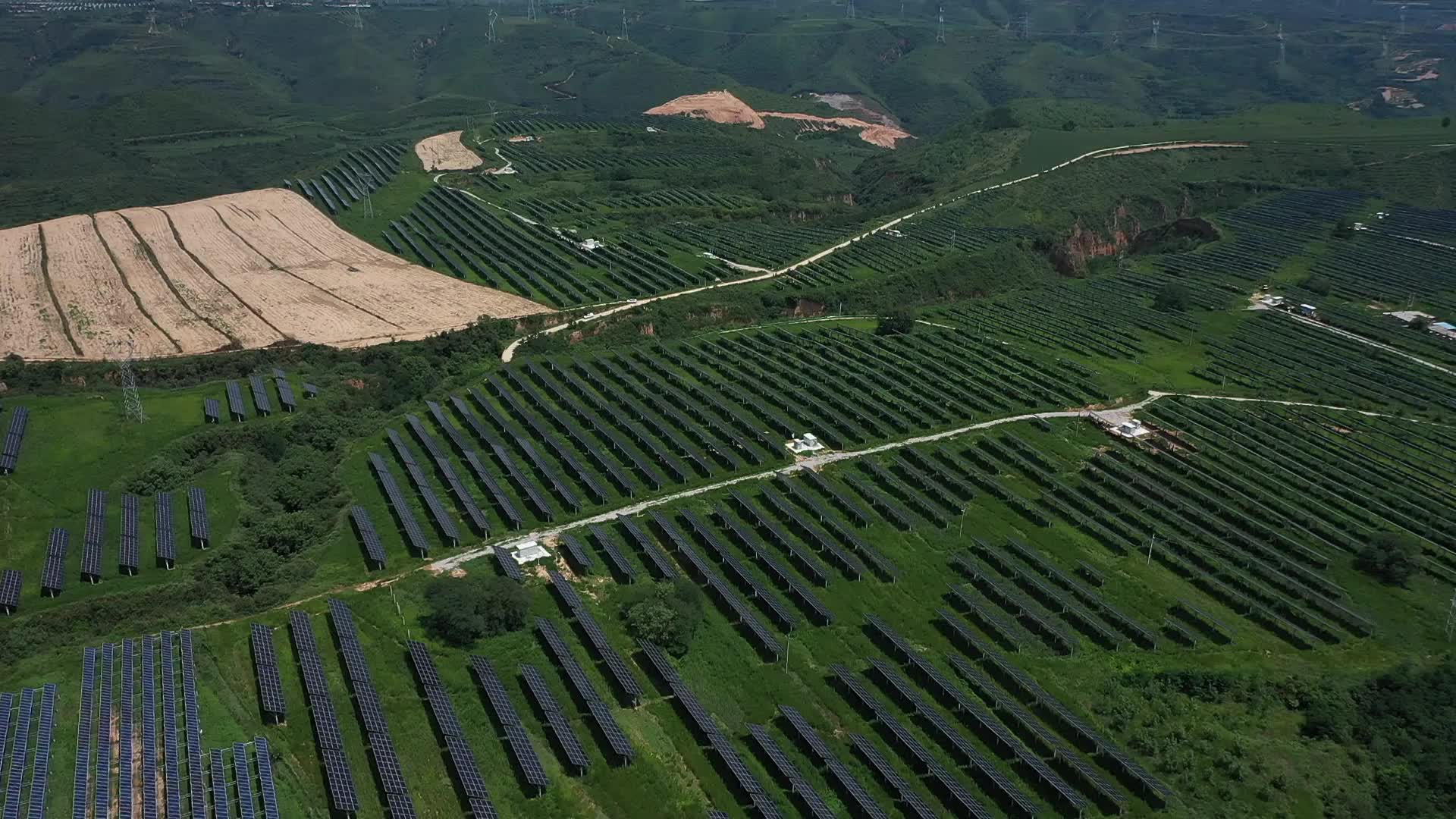 On a recent morning in central China, workers in blue jumpsuits and white masks placed clamps around a bar of shiny metal and fed it into a powerful cutting machine. The bar was an ingot made of polysilicon, a heavily refined cousin of the same material that makes up sand. Inside the cutter, it was sliced into thousands of small squares slightly larger than a CD case and thinner than a thumbnail. These wafers would then be shipped on to other factories to be infused with conductive elements such as phosphorous and boron, then wired into cells and assembled into panels—the base unit of solar energy generation.

The owner of this factory, Longi Green Energy Technology Co., is the world’s largest producer of solar wafers and the world’s largest solar company by market value. As of the end of last year it created about 1 of every 4 wafers made anywhere on the planet, and since then it’s announced at least five projects to expand its factories or build new ones. Despite a pandemic that may slow the growth of new solar power installations for the first time in decades, Longi expects its production capacity by the end of 2020 to have increased by two-thirds compared with 2019.

Longi and the other Chinese companies that dominate solar—collectively they control at least 60% of global capacity for every step in the supply chain—are playing a risky game. The short history of the solar industry is a tale of repeated boom and bust, with abrupt technological and policy developments rendering multibillion​-dollar investments obsolete. Industry leaders one day have, again and again, become bankruptcy filers the next.

The bet in China is that this time is different. Plunging costs have left solar the cheapest form of energy in parts of the world. Subsidies are disappearing as it becomes more competitive with other forms of electric generation, making demand less dependent on political decisions. And advances in energy storage are opening a tantalizing possibility: that solar could, in the near future, replace fossil fuels in many places. “We believe the solar market will maintain the trend of rapid growth,” says Li Zhenguo, Longi’s billionaire president. A physicist by training, he founded the company in 2000, naming it for a university principal who’d impressed Li with his academic rigor. “Current global production capacity, including Longi’s, is nowhere near enough to meet the coming demand.”

Longi dates to a time when Chinese solar manufacturers were relying primarily on cheap labor to undercut more established players from the U.S. and Europe. That strategy can collapse once wages rise, as they have in China. But, in Li’s telling, Longi was focused on coming up with a product that could compete in the longer term.

That aim led the company to make a momentous choice early on. There are two ways to make the blocks that solar wafers are sliced from: by cooling molten silicon into one homogeneous structure or encouraging it to crystallize from different points. The first approach, known as mono-crystalline, provides greater conductivity and efficiency. But it’s more expensive than multi-crystalline products, which most manufacturers favored in their efforts to compete with cheap fossil fuel generation.

Li decided that Longi, which in its early years relied on other companies to turn its wafers into cells and panels, would focus on mono fabrication, even if it meant losing out on short-term sales to less-expensive producers. For a long time the choice was eccentric; as recently as 2014, mono made up only 20% of the market. But around that time, China began to heavily subsidize solar installations, turbocharging demand and providing manufacturers with an incentive to compete on technology, not just cost. As its clout grew, Longi expanded vertically, and now it competes in nearly every part of the supply chain. The subsidies “transfused blood to the manufacturing sector,” says Yali Jiang, a BloombergNEF analyst in Hong Kong.

It’s now clear that Longi’s bet paid off. Li estimates mono will account for 90% of the market in 2020—a development that’s helped the company establish a commanding position. Part of the explanation is that, as costs have fallen, planners have placed a higher priority on mono’s superior efficiency. This preference is reflected in Longi’s $37 billion market capitalization on the Shanghai stock exchange, by far the highest of any solar company. Its success, Li says, came from picking a technological horse early, sticking with it, and “looking for measures to rapidly put it into production.”

As dominant as Longi might appear, no one stays on top of the solar industry for long. Yingli Green Energy Holding Co. was the world’s biggest maker of solar panels as recently as 2013, but aggressive borrowing to fund new production combined with a plunge in solar equipment prices drove it to the brink of collapse. In all, about 180 solar manufacturers have exited the industry or gone bankrupt in the past four years, according to Jiang.

Longi is trying to avoid their fate by not overextending itself financially. It’s managed to keep a lid on labor costs by boosting productivity, sometimes at the cost of the so-called green jobs that politicians in China and the West love to promote. At a wafer plant not far from Longi’s headquarters in the ancient imperial capital of Xi’an, producing 350 megawatts’ worth of product required about 1,000 people in 2010. Today its output is equivalent to 6,000 megawatts, with the same number of employees. At a nearby panel plant, the company’s smallest, only 100 or so workers are needed to operate a facility the size of 10 basketball courts. During a recent visit, the company was testing a packaging system that could allow it to get rid of forklift drivers and other logistical staff.

Cost-cutting can’t fully neutralize the other major threat to China’s solar industry: politics. The U.S. and European Union have periodically targeted Chinese manufacturers with anti-dumping tariffs since the early 2010s, claiming that subsidies allow them to sell below cost. The U.S.-China trade war kicked off in 2018 with duties on panels, and India, which is trying to reduce the economic influence of its giant neighbor, recently extended tariffs that had been set to expire on Chinese solar products.

China’s solar industry is nonetheless growing rapidly. According to BloombergNEF data, at the end of 2019 Chinese panel factories had an annual capacity of 193 gigawatts, 60% more than was installed worldwide in that year. Planned expansions could increase that total by more than half.

There’s an argument to be made that Chinese solar leadership is at worst benign and at best a source of considerable innovation. The raw materials for panels are inexpensive and abundant, and it would be easy for companies in places such as Malaysia and Vietnam to set up factories if Chinese producers raised prices. The hothouse atmosphere of China’s industry, meanwhile, has encouraged manufacturers to drive down costs. Measured per watt of output, the average price of panels has plunged 91% since 2010.

Solar optimists believe developments such as these might leave the world on the verge of an inflection point. In many places, generating electricity from the sun is now significantly less expensive than doing so from coal or natural gas. (Picking a location with sunny weather, as well as cheap land and financing, helps a lot, too.)

There’s also been significant progress on the technology’s biggest problem: that it can only generate electricity when the sun is out. When solar was primarily a supplement to traditional power plants, that wasn’t a major concern, because power demand tends to peak in daytime. But it becomes a serious constraint as more panels are installed, creating a daytime surplus that’s not useful at night. Engineers are refining a huge range of storage technologies, from improved batteries to “pumped storage” systems, which use solar electricity to send water uphill during daylight hours, releasing it through turbines when needed.

None has yet emerged as a game-changing solution, but Li is bullish on batteries, and he expects that a combination of live generation and storage will be enough to replace fossil fuels around the clock in at least some locations within a decade. He predicts that demand for solar installations will triple by 2025, to 300 gigawatts a year, before hitting 1,000 gigawatts in 2030. Those projections are wildly optimistic, however: BloombergNEF expects the 2030 figure to be closer to 200 gigawatts annually.

Whatever the rate of growth, the economics of the solar market “have significantly improved in the past decade,” Li says. Now, “energy is going to be more electrified, and electricity will be cleaner.” —With Dan Murtaugh and Feifei Shen