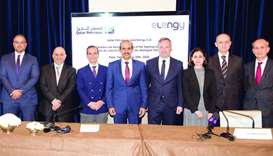 Under the agreement, Qatar Terminal Limited (QTL) – a subsidiary of Qatar Petroleum – will subscribe to the equivalent of almost 3mn tonnes per year (tpy) of the terminal’s throughput capacity for the next 15 years.

An affiliate of Qatar Petroleum and the French LNG terminal operator Elengy, a subsidiary of ENGIE Group, have entered into a long-term agreement for LNG receiving, storage and regasification services at the Montoir-de-Bretagne LNG Terminal in France.

Under the agreement, Qatar Terminal Limited (QTL) – a subsidiary of QP – will subscribe to the equivalent of almost 3mn tonnes per year (tpy) of the terminal’s throughput capacity for a term up to 2035.

Montoir-de-Bretagne LNG will thereby become a new LNG import terminal position for QP in Europe, facilitating the supply of Qatari and internationally sourced LNG to French and European customers.

The agreement is the result of a formal “Open Subscription Period” process that was concluded during the second half of 2019 pursuant to the rules of the French Energy Regulatory Commission (CRE).

The agreement was signed at a ceremony held in Paris on Thursday by HE the Minister of State for Energy Affairs Saad bin Sherida al-Kaabi, also the president and CEO of QP, and Sandra Roche-Vu Quang, CEO, Elengy, in the presence of Jean-Baptiste Lemoyne, France’s Minister of State attached to the Minister for Europe and Foreign Affairs.

At the signing ceremony, al-Kaabi said, “By signing this agreement, we are providing France, and Europe as a whole, reliable energy supplies, as well as increased utilisation of gas as a cleaner and more environmentally friendly source of energy.

“We are also taking another step into the future by establishing a long-term partnership with Elengy well into the next decade. And, we look forward to further strengthen this relationship in the future.”

Al-Kaabi also highlighted the strong Qatari-French partnerships in general and especially in the energy sector, as well as QP’s commitment to Europe’s energy security.

“Qatar Petroleum has long invested in and anchored LNG receiving terminal capacity in Europe. We have also played a key role in supporting the development of vital energy network infrastructure in Europe. As the largest LNG producer, we are committed to supporting the advancement of EU energy policy and to strengthening the security, reliability and flexibility of gas supplies into Europe,” al-Kaabi noted.

Roche-Vu Quang said, “Today is a key milestone for Elengy. As pioneers in the LNG industry, we are extremely proud of this agreement with our Qatari partners, a major step which hopefully will result in an even closer co-operation in the coming years. This contract secures long-term activity at the Montoir-de-Bretagne terminal.

Located on France’s Atlantic coast, the Montoir-de-Bretagne LNG Terminal was commissioned in 1980 and is fully regulated by the CRE. The terminal currently has 360,000 cubic metres of LNG storage capacity spread across three tanks and an annual throughput capacity of 10bn cubic meters of natural gas.

The terminal is operated by Elengy, which has over 50 years of LNG experience and operates two other terminals in France- Fos Tonkin and Fos Cavaou on the Mediterranean coast.

The ceremony was attended among others by senior executives from QP and Elengy.