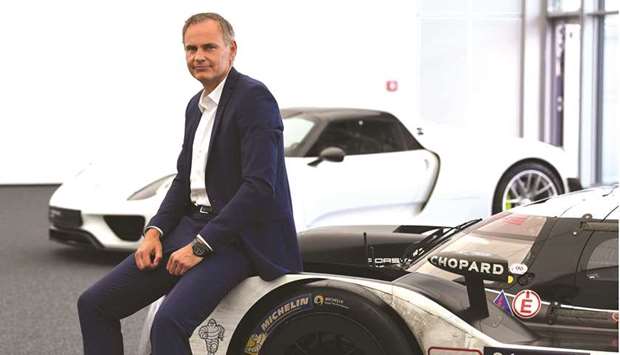 Confession: I’m an auto writer and I drive one of the world’s most boring vehicles.
It’s a minivan and a hybrid, though not a particularly robust one.
The 2018 Chrysler Pacifica manages just 30 miles on a charge.
Did I mention it’s white?
While my Tesla-driving neighbour may snicker, my dad-math is simple and sanguine: my crew seldom rolls more than 20 miles in a day.
Even with a standard outlet, we can fully recharge the Pacifica’s meagre battery overnight and start again the next day, cruising on the electric motor on the eight-mile soccer commute or the 12-mile Home Depot lap.
On the rare road trip, we burn some fossils.
All told, we buy gas about four times a year.
Electric vehicles are killing the gas-powered car – even faster than expected – but they are also running roughshod over hybrid vehicles like mine, their cranky older siblings.
In America, sales of fully electric vehicles eclipsed those of plug-in hybrids four years ago and have steadily pulled away since.
Americans bought four EVs for every hybrid in the first quarter of this year.
In Asia, hybrids lost the lead to EVs almost six years ago and the gap is far wider.
I get it, no one wants to do dad-math while they’re standing on the sales lot.
With a purchase that big, the heart wants what the heart wants – namely something new and exciting.
A hybrid, increasingly, is a flip phone in an iPhone world.
Here’s the thing, though: hybrids are bonkers good these days.
The nice thing about writing about the auto industry is that I get to drive a lot of different vehicles – “press cars” in the industry lexicon.
The first-hand experience is helpful when interviewing auto executives, and one of the best ways to stay familiar with what they’re making.
Lately, my driveway has been a parade of excellent hybrids.
Right now, it’s a Toyota Highlander that is steadily posting 35 miles to a gallon.
Before that, there was the Hyundai Sonata, Kia Sorento and a sublime BMW 530e.
Some, like my Pacifica, can be plugged in and charged, but many generate their electricity exclusively by dragging off the car’s momentum when it slows.
In the industry argot, the former are plug-in hybrid electric vehicles, or PHEVs, and the latter are hybrid electric vehicles, or HEVs. Their much cooler, electric-only cousins are known as battery electric vehicles, or BEVs.
Nothing with an “H” in the acronym carries any gravity in the Tesla-sphere, but they all quietly nudged the needle on carbon emissions.
And they’re all a little more fun to zip around in than their combustion cousins.
The standout of late was the Toyota RAV4 Prime, which goes for 42 miles before the spark plugs flare up and the tiny explosions start.
That’s top of the hybrid class these days, and more than enough for the average US commute.
And on a road-trip, it entirely cancels out the biggest EV bugaboo: range anxiety.
The combustion engine on a car like the RAV4 Prime is like a standby package of hot dogs at a barbecue or a well-rested starting pitcher sitting in the bullpen.
Don’t think of it as a gas vehicle with a trickle of electrons, but as an EV with a robust Plan B.
True, it lacks the tech smugness of a silent, sentient Tesla, but the tradeoff is pretty good.
And I’m not the only one who thinks so – the rigs are selling like ice cream at the beach, according to Samantha Groot, Toyota general manager of vehicle marketing.
In the first quarter of this year, nearly one in four vehicles Toyota sold in the US was some form of hybrid, up from 12% a year earlier.
Honda is part of the acceleration, as well.
The share of customers buying its hybrid CR-V SUV surged 10-fold this spring.
Zombies With Batteries In Europe, the Middle East and Africa, more stringent emissions thresholds in the first quarter boosted plug-in hybrid sales ahead of purely electric vehicles for the first time in nearly three years, according to BloombergNEF.
In America, EVs stayed far ahead in that period, but there’s some evidence the chimera vehicles gained back some ground in the second quarter.
Combination gas and electric vehicles accounted for 6% of US vehicle registrations in April, more than double the share of fully electric rigs, according to IHS Markit.
This isn’t coming from Gen Z early adopters.
The new wave of hybrid buyers tend to be older, and many of them live in the South and Midwest, according to IHS.
In short: it’s regular old car people making slightly more pragmatic (and greener) decisions.
Tesla surely doesn’t care, but rest assured this stat isn’t lost on other auto executives.
In the race to EV supremacy, the slow lane will be stacked with better and better hybrids.
So don’t pour one out for the Prius just yet.
It’s still doing just fine, and is increasingly in good company.
Just this week, Ferrari unveiled its second plug-in hybrid.
It’s a lot like my minivan, save for the 205 miles-per-hour bit.