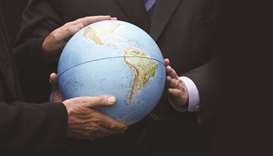 The silver lining in the gloomy cloud of the pandemic was the opportunity it gave the West to mend its ways. During 2020, rays of light shone through. The European Union was forced to contemplate a fiscal union. Then, it helped remove Donald Trump from the White House. And a global Green New Deal suddenly appeared less far-fetched. Then 2021 came along and drew the blackout curtains.
Recently, in its financial stability review, the European Central Bank issued an angst-ridden warning: Europe is facing a self-perpetuating debt-fueled real estate bubble. What makes the report noteworthy is that the ECB knows who is causing the bubble: the ECB itself, through its policy of quantitative easing (QE) – a polite term for creating money on behalf of financiers. It is akin to your doctors alerting you that the medicine they have prescribed may be killing you.
The scariest part is that it is not the ECB’s fault. The official excuse for QE is that once interest rates had fallen below zero, there was no other way to counter the deflation menacing Europe. But the hidden purpose of QE was to roll over the unsustainable debt of large loss-making corporations and, even more so, of key eurozone member states (like Italy).
Once Europe’s political leaders chose, at the beginning of the euro crisis a decade ago, to remain in denial about massive unsustainable debts, they were bound to throw this hot potato into the central bank’s lap. Ever since, the ECB has pursued a strategy best described as perpetual bankruptcy concealment.
Weeks after the pandemic hit, French President Emmanuel Macron and eight other eurozone heads of government called for debt restructuring via a proper eurobond. In essence, they proposed that, given the pandemic’s appetite for new debt, a sizeable chunk of the mounting burden that our states cannot bear (unassisted by the ECB) be shifted onto the broader, debt-free, shoulders of the EU. Not only would this be a first step toward political union and increased pan-European investment, but it would also liberate the ECB from having to roll over a mountain of debt that EU member states can never repay.
Alas, it was not to be. German Chancellor Angela Merkel summarily killed the idea, offering instead a Recovery and Resilience Facility, which is a terrible substitute. Not only is it macroeconomically insignificant; it also makes the prospect of a federal Europe even less appealing to poorer Dutch and German voters (by indebting them so that the oligarchs of Italy and Greece can receive large grants). And, despite an element of common borrowing, the recovery fund is designed to do nothing to restructure the unpayable debts that the ECB has been rolling over and over – and which the pandemic has multiplied.
So, the ECB’s exercise in perpetual bankruptcy concealment continues, despite its functionaries’ twin fears: being held to account for the dangerous debt-fueled bubble they are inflating, and losing their official rationale for QE as inflation stabilises above their formal target.
The scale of the opportunity Europe has wasted became obvious at the recent United Nations Climate Change Conference (COP26) in Glasgow. How could EU leaders lecture the rest of the world on renewable energy when rich Germany is building lignite-fueled power stations, France is doubling down on nuclear energy, and every other EU member state saddled with unpayable debts is left to its own devices to deal with the green transition?
The pandemic gave Europe an opening to devise a credible plan for a well-funded Green Energy Union. With a eurobond in place, and thus liberated from the purgatory of perpetual bankruptcy concealment, the ECB could be backing only the bonds that the European Investment Bank issues to fund a Green Energy Union. So, yes, Europe blew its opportunity to lead the world by example away from its addiction to fossil fuels.
We Europeans were not alone, of course. As US President Joe Biden was landing in Glasgow, the usual corrupt congressional politics back home were uncoupling his already much-shrunken green agenda from a very brown infrastructure bill, placing climate change on the back burner. While the United States, unlike the eurozone, at least has a Treasury Department that works in tandem with its central bank to keep debts sustainable, it, too, has missed a magnificent opportunity to invest heavily in green energy and the high-quality jobs implied by the transition from fossil fuels. How can the West expect to persuade the rest of the world to embrace ambitious climate commitments when, after two years of waxing lyrical about the green transition, Biden and the Europeans arrived in Glasgow virtually empty-handed? As 2021 winds down, Western governments, having wasted their chance to do something about the clear and present climate emergency, are choosing to focus on exaggerated worries. One is inflation. While the acceleration in price growth must be checked, the widespread comparisons with the stagflation of the 1970s are ludicrous. Back then, inflation was essential for a US actively blowing up the Bretton Woods system in order to maintain the dollar’s “exorbitant privilege.” Today, inflation is not functional to American hegemony; rather, it is a side effect of the US economy’s reliance on the financialisation process that imploded in 2008.
The West’s other constructed panic is China. Initiated by former US President Donald Trump, and zealously perpetuated by Biden, the emerging new cold war has an unacknowledged purpose: to enable Wall Street and Big Tech to take over China’s finance and technology sectors. Terrified by China’s advances, like a functioning central bank digital currency and a macroeconomic stance that is vastly more sophisticated than their own, the US and the EU are opting for an aggressive stance that is a mindless threat to peace and to the global co-operation needed to stabilise our planet’s climate. A year that began hopefully is ending grimly. Western political elites, unable (and perhaps unwilling) to turn a deadly crisis into a life-preserving opportunity, have only themselves to blame.  — Project Syndicate

? Yanis Varoufakis, a former finance minister of Greece, is leader of the MeRA25 party and Professor of Economics at the University of Athens.