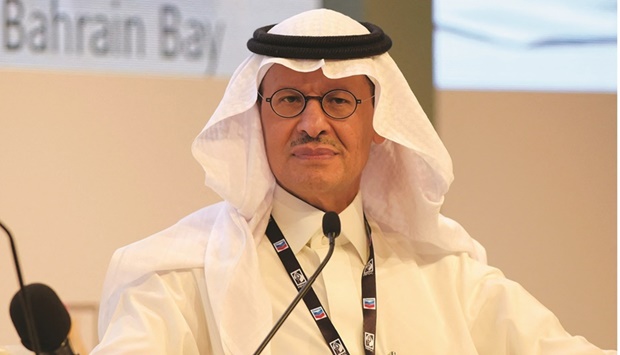 Saudi Arabia expects to ramp up its daily oil production capacity by more than 1mn barrels to exceed 13mn barrels by early 2027, the kingdom’s energy minister announced Monday.
“Most likely it will be 13.2 to 13.4 (million barrels per day), but that would be (reached) at the end of 2026, beginning 2027,” Prince Abdulaziz bin Salman told an energy conference in Bahrain.
Production at that level would be maintained “if the market allows it”, he said.
Energy giant Saudi Aramco announced in March 2020 it had been directed by the energy ministry to increase its maximum sustainable capacity from 12mn bpd to 13mn bpd.
No timeline was given then for the new target.
Monday’s announcement came one day after Saudi energy giant Aramco posted an 82% jump in first quarter profits, buoyed by a global surge in oil prices stemming from the Ukraine war.
Those results helped Aramco dethrone Apple last week as the world’s most valuable company by market capitalisation.
They continued a string of positive economic news for Saudi Arabia, which in early May reported that growth in the first quarter had risen 9.6% over the same period in 2021.
Yet Aramco has faced security challenges stemming from the war pitting a Saudi-led military coalition against Yemen’s Houthi rebels who have repeatedly targeted the kingdom, including Aramco sites.
Saudi Arabia, the world’s biggest oil exporter, has resisted US entreaties to raise output in an attempt to rein in prices that have spiked since the Ukraine war broke out on February 24.
As the war got underway, Saudi Arabia and the United Arab Emirates stressed their commitment to the Opec+ oil alliance, which Riyadh and Moscow lead.
Last year, ahead of the COP26 climate-change summit, Saudi Arabia pledged to achieve net zero carbon emissions by 2060, sparking scepticism from environmental campaign group Greenpeace.
With increasing global urgency to limit global warming, experts warn of the urgent need to reduce fossil fuel use.
But Saudi officials’ stated targets indicate “they still believe in oil as a source of energy for the coming decade”, Mazen Alsudairi, head of research for Al Rajhi Capital, a financial services firm in Riyadh, told AFP. “They are not following the global trend by reducing exposure to hydrocarbons.”
Also at Monday’s conference in Bahrain, Iraqi Oil Minister Ihsan Abdul-Jabbar Ismail said his country was accelerating its production capacity goals, targeting 6mn bpd in 2027 and 8mn bpd in 2029.
Iraq’s current daily production is just under 3.5mn.
It reported $11bn in oil revenues in March, Iraq’s highest in half a century.