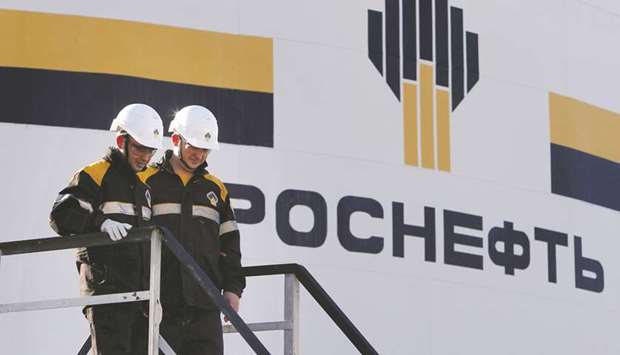 Russia took a step closer to becoming a dominant player in the global liquefied natural gas market as two of its biggest energy companies advanced plans to export the fuel from its remotest corners.
Rosneft PJSC, Russia’s top oil company, said yesterday it plans together with its partners in the Sakhalin 1 project to build an LNG export plant in the far eastern port city of De-Kastri. Meanwhile Novatek PJSC, the country’s largest LNG producer, made a final investment decision on its $21bn Arctic LNG 2 plant on the Gulf of Ob.
Natural gas is expected to be the fastest growing fossil fuel through 2040, and it will increasingly be transported in liquid form, according to the International Energy Agency. China, India and other developing countries plan higher imports to bring energy and electricity to their people at a fraction of the pollution of coal or oil.
The two projects combined could export about 26mn tonnes of LNG a year, which would double Russia’s existing capacity. Already the world’s top exporter of pipeline gas and second-biggest shipper of crude oil, LNG will give President Vladimir Putin a bigger role in driving the world economy via his country’s massive energy resources.
“After the oil price crash of 2015 and a massive addition of Australian LNG, supermajors held back major LNG investments – but that has changed now. The global LNG market is expected to hit a supply deficit by 2023, according to BloombergNEF’s latest Global LNG Market Outlook. Projects are now being lined up to capture that gap in the market, and the front-runners are those supported by Big Oil,” said Fauziah Marzuki, analyst, BloombergNEF.
Russia, which had 8% of the global LNG market last year, wants to boost that to 20% by 2035 to put it in league with the world’s biggest exporters, such as Qatar and Australia. Yesterday’s announcements, made at the Eastern Economic Forum in Vladivostok, underscore how quickly the country is progressing toward that goal. Its first plant, at Gazprom PJSC’s Sakhalin 2, opened in 2009 and its second, Novatek’s Yamal LNG, only started in 2017.
The first production unit at Arctic 2 LNG will come online by the end of the third quarter of 2023, Novatek chief executive officer Leonid Mikhelson said. Once fully complete, the plant will be able to produce 19.8mn tonnes of LNG annually. Rosneft CEO Igor Sechin didn’t give a timeline for the far east LNG plant, which he said would be able to produce about 6.2mn tonnes a year.
For now, several export projects, including Yamal, have come online recently and saturated the market, depressing spot LNG prices in Asia to about 60% below where they were a year ago.