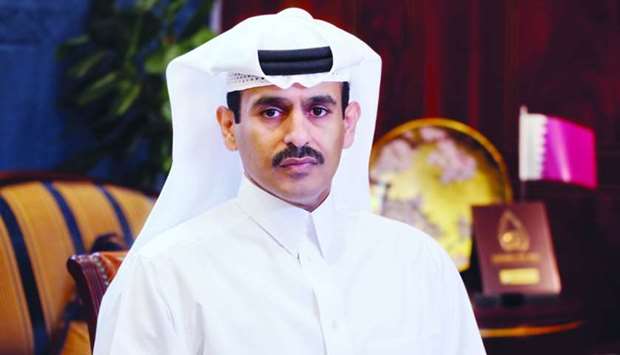 HE the Minister of State for Energy Affairs as well as president and CEO of Qatar Petroleum, Saad bin Sherida al-Kaabi, has said Qatar National Day unites Qataris and all those who love Qatar in expressing loyalty to the beloved homeland, and in renewing allegiance to the wise leadership of His Highness the Amir Sheikh Tamim bin Hamad al-Thani, who is leading the country to greater pride and development built on the foundations laid by the late founder Sheikh Jassim bin Mohammed bin Thani.
In remarks to Qatar News Agency, al-Kaabi said that National Day is an occasion of glory and pride for the State of Qatar, which reinforces the belonging to the country.
He added such feelings are reflected every day in the manifestations of solidarity, unity and cohesion that unites all spectrums of the Qatari society, whether during the unjust blockade, or in the face of the global pandemic.
Al-Kaabi noted that just as the founder united the people of the country and strengthened their cohesion and harmony, the wise leadership has deepened the connection to the great land and created a generation with strong sense of belonging to the nation.
On QP’s achievements this year, al-Kaabi said QP has strengthened its strategy and institutional values on the road to achieving its vision to become one of the best national oil and gas companies in the world by strengthening the position of Qatar on the global energy map and expanding its international presence in the field of exploration.
He said QP received the “New Venturer of the Year Award” as part of the Wood Mackenzie Exploration Awards 2020, in recognition of its outstanding and growing exploration presence across the globe.
QP is the first national oil company to win such award after it was won by Total in 2019 and ExxonMobil in 2018, he said, noting that the company signed a number of long-term agreements to buy and sell LNG with brotherly and friendly countries.
Al-Kaabi pointed out that QP signed agreements with three Korean companies to reserve LNG ship construction capacity in South Korea to support the ongoing expansion projects in the LNG production.
By signing these agreements, QP secured approximately 60% of the global LNG shipbuilding capacity through 2027 to cater to its future LNG fleet requirements.
QP has announced the start of operations of QP Trading as its dedicated LNG trading arm.
Wholly owned by QP and based in Doha, QP Trading is mandated to build a globally diversified portfolio of third party and equity LNG.
To enhance its national human resources, al-Kaabi said QP has spared no effort in providing education, training and development opportunities for the widest possible segment of the promising young men and women of the country.
Al-Kaabi affirmed that QP has worked on the immediate response to manage the outbreak of Covid-19 and limit its effects on QP and the rest of the energy sector.
A crisis management team and a number of work groups and project teams were formed to lead response efforts and implement key measures to protect employees while minimising risks to the continuity of QP’s operations.