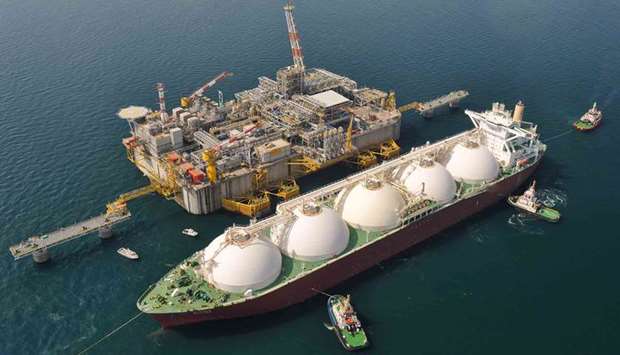 The multi-billion dollar North Field East (NFE) project will “reposition Qatar as the world leader” in terms of liquefaction capacity, overtaking Australia, the International Gas Union (IGU) has said in a report.
Qatar Petroleum has taken the final investment decision for the NFE project, the world’s largest LNG project, which will raise Qatar’s LNG production capacity from 77mn tonnes per year (mtpy) to 110mtpy.
The project involves the construction of four new LNG mega-trains with a capacity of 8mtpy, the IGU said in its ‘World LNG Report 2021’.
This year’s global LNG trade increased to 356.1mn tonnes, a small increase of 1.4mn tonnes compared to 2019, but another year of consecutive growth in LNG trade despite Covid-19 related impacts on the supply and demand sides, noted Joe M Kang, president, IGU.
This was mostly supported by increased exports from the US and Australia, together adding 13.4mn tonnes of exports.
Asia Pacific again imported the most volumes in 2020, together accounting for more than 70% of global LNG imports. Asia also accounted for the largest growth in imports in 2020 – adding 9.5mn tonnes of net LNG imports compared to 2019.
Global LNG market pricing experienced a turbulent year. Spot prices of cargoes trading in the Atlantic and Asia Pacific basins plummeted to record lows in the first six months, before reaching record highs at the start of 2021.
Pricing responded to Covid-19 impacts on demand, an initially well-supply market, and high storage levels in some markets, followed by a cold winter and shipping constraints.
While 20mn tonnes per year in liquefaction capacity was brought onstream in 2020, all in the US, start-up of several liquefaction trains in Russia, Indonesia, the US and Malaysia were delayed as a result of the pandemic.
The only project that was sanctioned in 2020 was the 3.25 mpta Energia Costa Azul facility in Mexico, and early 2021 Qatar took FID on four expansion trains totalling 32mn tonnes per year, the IGU said.
With additional new projects proposed, global pre-FID volumes stand at 892.4mn tonnes per year, most of which are in North America, the IGU noted. With some 35 new vessels added to the LNG shipping fleet in 2020, the total number of active vessels reached 572 at the end 2020, including 37 FSRUs and 4 FSUs.
Notably, with the exception of one, all new vessels are equipped with membrane containment systems, and 23 of them feature X-DF propulsion systems. Membrane containment systems capitalise on improved fuel efficiencies and lower emissions.
The number of LNG voyages, however, only increased by 1%, largely due to demand impact of Covid-19. Global regasification capacity increased by 19mn tonnes per year in 2020, bringing the total to 850.1mn tonnes per year as of February 2021.
Four new terminals and four expansion projects at existing terminals started importing cargoes – with the majority in the Asia Pacific region. There are now 39 markets that are equipped with LNG receiving capabilities.
As of February 2021, there was 147.3mn tonnes per year of regasification capacity under construction, of which 72.3mn tonnes per year have communicated start-up dates in 2021, some of which is in new importing markets such as Ghana, El Salvador, Vietnam and Nicaragua.
Offshore regasification capacity increased by 5.6mn tonnes per year, bringing the global floating and offshore regasification capacity to 115.5mn tonnes per year as of February 2021, the IGU said.