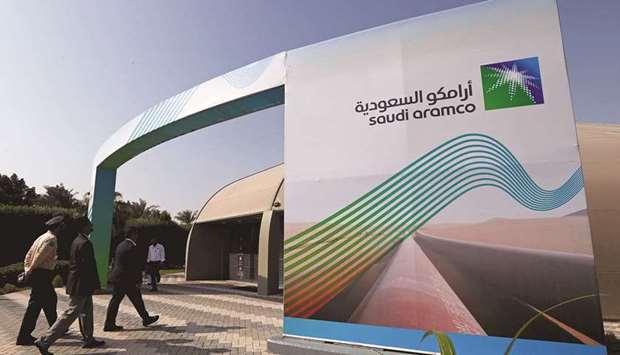 Saudi Arabian oil giant Aramco locked in another $6bn yesterday to help fund a large dividend as it returned to the international debt markets with its first USdollar-denominated sukuk sale, a document showed.
The debt issuance, which will help fund a $75bn dividend commitment that will mostly go to the government, comprises tranches of three, five and 10 years, adocument from one of the banks arranging the deal and seen by Reuters showed.
Aramco sold $1bn in the three-year tranche at 65 basis points (bps) over US Treasuries (UST), $2bn in the five-year portion at 85 bps over UST and $3bn in 10-year paper at 120 bps over UST.
Initial price guidance was around 105 bps over UST for the three-year bonds, around 125 bps over UST for the five-year notes and around 160 bps over UST forthe 10-year tranche.
The spreads were tightened after the deal attracted combined orders of more than $60bn.
Aramco last year maintained its promised $75bn annual dividend to shareholders despite lower oil prices, and is expected to shoulder significant domesticinvestments in Saudi Arabia’s plans to transform the economy.
Fitch assigned Aramco’s sukuk issuance programme an A1 rating with a negative outlook, in line with the negative outlook on existing Aramco ratings andtracking a change in Saudi Arabia’s sovereign outlook to negative in May last year.
“The company has displayed a strong commitment to pay $75bn in annual dividends, which in Moody’s view is not sustainable should oil prices fall and remainsignificantly below $60/bbl,” Fitch said.
“Interlinkages between Saudi Arabia and the company imply that any change in rating outlook on the government of Saudi Arabia would be mirrored on SaudiAramco’s rating outlook.”
The company chose to issue Islamic bonds over conventional ones due to high demand for the instrument as a result of the low number of dollar sukuk sales inthe Gulf this year, a source told Reuters on Monday.
Aramco has been widely expected to become a regular bond issuer after its debut $12bn issuance in 2019 was followed by an $8bn, five-part transaction inNovember last year, also used to fund its dividend.
A source had told Reuters that Aramco was expected to raise up to $5bn with the deal, which had 29 active and passive bookrunners working on it.
Active bookrunners on the deal included Citi, HSBC, JPMorgan, NCB Capital and Standard Chartered Bank.