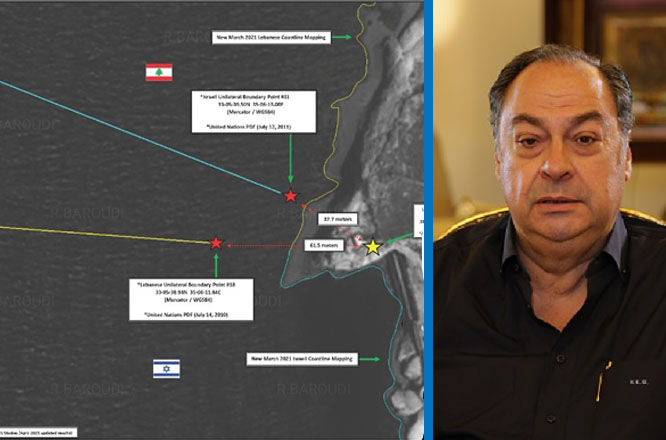 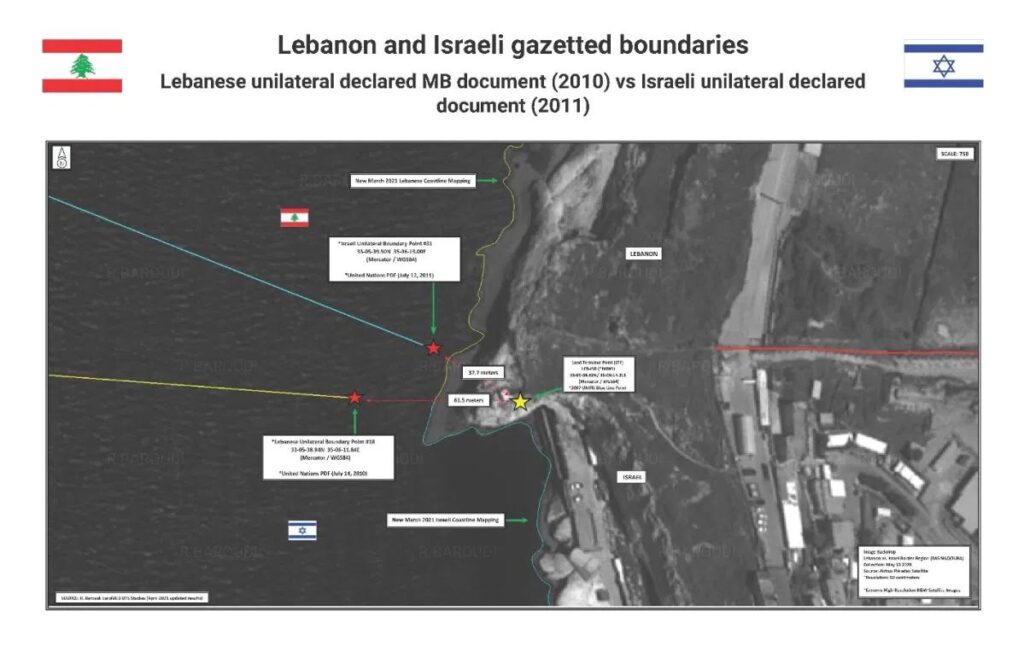 Lebanon vs. Israel both need to update Maritime Boundaries – Lebanese political circles are in a tangle once again, this time over whether Lebanon should provide the United Nations with new coordinates defining the country’s offshore Exclusive Economic Zone (EEZ). In reality, two questions need answering:

1) Does Lebanon have the right to update its maritime claims to the UN?

2) If so, should Lebanon avail itself of that right in the present circumstances?

The issue is of critical importance, not only because it relates directly to Lebanon’s (currently stalled) maritime boundary talks with Israel, but also because it stands to impact the speed with which it can begin to obtain tangible benefits from any undersea hydrocarbons within its EEZ.

Helpfully, the first question is the easiest. Lebanon’s right to update its territorial submissions to the UN is not only enshrined in the UN Convention on the Law of the Sea (UNCLOS), but also protected by Customary International Law (CIL), and established by innumerable precedents as a standard practice of countries seeking to define and defend their maritime claims, not least because continual technological advance allows increasingly accurate mapping.

It is important to note, too, that Presidential Decree 6433 of 2010, under which Lebanon’s claim was last expressed to the UN, expressly envisaged the possibility of future updates. Article 3 leaves no room for interpretation whatsoever, reading: “As needed, and in the light of negotiations with the relevant neighboring States, the borders of the exclusive economic zone may be refined and improved and, consequently, the list of its coordinates amended, if more precise data becomes available.” Lest there be any doubt, and as we will see below, such data has become available.

What is more, when Lebanon’s Permanent Mission to the UN submitted the claims authorized under Decree 6433, its accompanying letter included the following advisory: “There is a need to conduct a detailed survey, using a global positioning system, of the shore contiguous to the southern limit, including all islands and spurs, with a view to updating the nautical charts and the baseline accordingly in the future.” Again, to be perfectly clear: such survey work has been conducted.

Also, while Israeli officials have sought (not very convincingly) to question Lebanon’s right to update its claim, their country’s own October 2010 EEZ agreement (itself based on Israeli coordinates which we now know to be incorrect and which would therefore be rejected by any court or tribunal) with Cyprus also expressly recognizes the fact that under CIL, such coordinates are subject to change. Article 1 (e) of that agreement reads as follows: “Taking into consideration the principles of customary international law relating to the delimitation of the Exclusive Economic Zone between States, the geographical coordinates of points 1 or 12 could be reviewed and/or modified as necessary in light of a future agreement regarding the delimitation of the Exclusive Economic Zone by the three States concerned with respect to each of the said points.”

In addition, in a subsequent unilateral submission to the UN, Israel’s own mission to the world body not only referred to “the relevant provisions of Article 1 (e)”, but also reproduced the language, virtually verbatim. The submission even repeated mention of “the three States concerned”, which in context can only indicate Lebanon as the third state.

On Lebanon’s right to submit new coordinates, then, the verdict is inescapable: it definitely has that right. Realistically, anyone who argues otherwise is either opposed to the best interests of Lebanon (which needs to develop this resource), the Lebanese (who deserve to reap the attendant economic rewards), and the Lebanese Armed Forces (which are heavily invested in a positive outcome); ignorant of the facts and the rules; or pursuing some other political, financial, and/or other personal/partisan advantage.

Next question: should Lebanon exercise its right at this particular juncture?

On the surface, this answer is almost as clear. In 2011, just months after the Israel-Cyprus deal and Lebanon’s last submission to the UN, the Lebanese government received expert analysis and advice regarding the United Kingdom Hydrographic Office charts – long considered the gold standard of maritime cartography – for the area. What the experts found is that both Lebanon and Israel had used erroneous coordinates as starting points for their maritime boundaries (please see attached map): where such points should be situated at the shoreline, both countries had placed them dozens of meters offshore. This may not sound like much, but by the time a line drawn out to sea from such a misplaced starting point reaches what should be the trijunction – where the EEZs of Cyprus, Israel, and Lebanon meet – the error could amount to several nautical miles.

Ipso facto, both Lebanon and Israel have based their previous maritime claims on faulty coordinates, which makes everything that flows from them obsolete, what the French would call “caduc” – meaning null and void. To both, this imparts not only a right to update their claims before the UN, but also an obligation to do so based on each side’s own best interest. In addition, recent experience demonstrates that, especially with such evidence that their respective claims were fatally flawed, if the current talks failed and the two countries went to court or arbitration over the issue, the first thing asked of them would be to replace their faulty maps by carrying out detailed surveys and analyses in order to precisely determine any points of contention.

In the technical sense, then, yes, Lebanon should definitely move quickly to update the maritime claims it has previously submitted to the UN. But other considerations also need to be weighed.

For instance, while Lebanon is a sovereign country, it cannot afford to entirely ignore the positions of outside actors. When these run contrary to its own wants and needs, it must weigh the pros and cons and decide accordingly. In this instance, Israeli officials have sought to discourage Lebanon from updating its claims or otherwise delaying the resumption of the aforementioned talks, raising the prospect that doing so could forestall progress, worsening tensions and forcing a longer wait for any offshore oil and gas development.

The latter point could be of particular significance because of what an energy boom could mean for the Lebanese population. Lebanon’s economy has shrunk by an estimated 25% over the past year, following a debt default that led to the collapse of its currency and consumer price increases that qualify as hyperinflation. Worse, the political class has demonstrated little stomach for the kinds of reforms required to secure a bailout by the International Monetary Fund (IMF).

The current Cabinet, led by Prime Minister Hassan Diab, resigned seven months ago over an explosion at the Port of Beirut that damaged or destroyed tens of thousands of homes, so it operates in a caretaker capacity. His designated successor is also his predecessor, former Prime Minister Saad Hariri, who himself resigned in the face of popular protests that gripped the country in late 2019. While he enjoys considerable support in certain foreign capitals, Hariri’s domestic position can only be described as weak, and the mere fact that he has been unable to form a Cabinet after more than half a year leaves little doubt that even if he succeeds, he largely will be incapable of decisive action on significant issues.

So we have another question: should Lebanon forego some of its rights in order to hasten an agreement that allows it to start earning some badly needed revenues from offshore resources?

The answer to that should be a resounding “no”. The border area contains some of Lebanon’s most promising offshore acreage, and in any event, there is no guarantee that giving it up would grease the wheels for a diplomatic breakthrough – and even if did, the outside investment required to get an energy industry up and running depends on a whole other set of prerequisites, not least the reforms that no one has been able to see through.

Also, in addition to the 2011 analysis, the Lebanese Armed Forces have carried out detailed studies of their own, which have significantly strengthened the Lebanese position. Senior LAF officers also have acquitted themselves with a high degree of professionalism in their US-mediated dialogue with the Israelis. In tandem with newly deposited coordinates, the quality of the LAF’s work might actually hasten the negotiating process by demonstrating that the Lebanese side will not bluster, but nor will it be bullied or bamboozled. No one expects that Washington will abandon its close relationship with Israel, but the LAF’s all-business approach, unsullied by the vagaries of Lebanese politics, encourages the Americans to be as even-handed as possible.

Again, the case for a timely and assertive amendment of Lebanon’s maritime submission seems airtight, but only if the issue can be inoculated against Lebanon’s dysfunctional politics.

Given the history of Lebanese politics, it is natural that even good-faith actors want to ensure they have sufficient political cover before making any important move. While this is certainly a step of consequence, however, its merits are so obvious that it should require only a bureaucratic and/or legal decision by the appropriate people at the Foreign Ministry. The fact that it requires higher authorization should not be an excuse for yet another chicken-and-egg standoff along the lines of those that have alienated, frustrated, impoverished, and quite literally killed hundreds of thousands of Lebanese over the past half-century.

Rather, it should spur officials to get creative about how to make progress today without hanging people out to dry tomorrow. There are ways to compromise on procedure without sacrificing accountability, integrity, or transparency, and the stakes are so high that finding such a formula will be worth whatever effort it requires. And for once, the people of Lebanon might be able to believe their leaders are acting for purely national reasons, not personal ones. 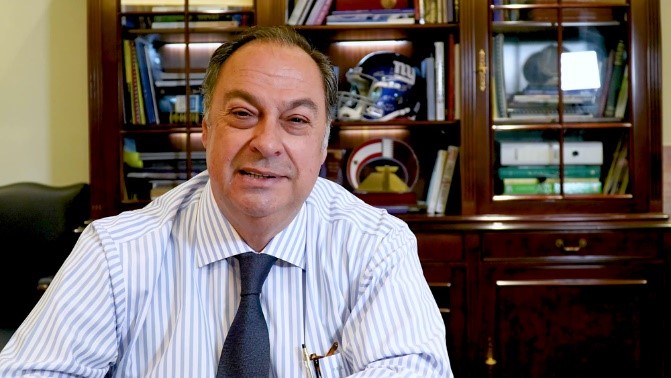 Roudi Baroudi has more than 40 years of experience in the energy business and has helped design policy for major international oil companies, sovereign governments, and multilateral institutions. He currently serves as CEO of Energy and Environment Holding, an independent consultancy based in Doha, Qatar.