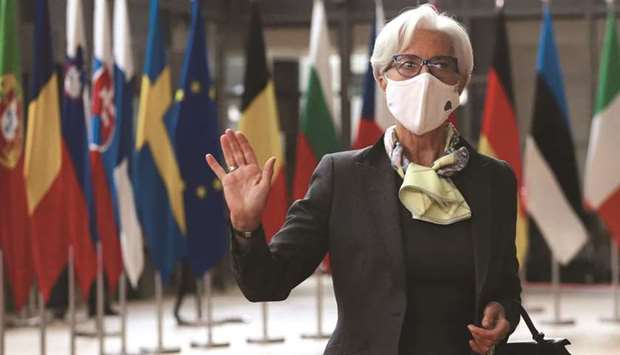 European Central Bank president Christine Lagarde urged leaders to keep their fiscal purse strings loose, warning that a premature brake on stimulus measures could derail a nascent recovery.
At a summit of European Union leaders in Brussels yesterday, Lagarde said continued support is needed to avoid the pandemic leaving large scars on the economy, according to an official familiar with her remarks.
The president cited the example of the aftermath of the great financial crisis, when a rebound failed to be sustained because “green shoots were not watered,” according to the official, who asked not to be named as the meeting was private.
European economies are starting a robust recovery on the back of an accelerating vaccination campaign. With coronavirus infections dropping, and booming demand triggering a spike in prices, pressure is building up in some quarters for the ECB to considering exiting emergency stimulus, and for governments to consider how to reduce debt burdens.
ECB officials Isabel Schnabel and Pablo Hernandez de Cos used public events on Thursday and yesterday to emphasise that even if the economy is able to recoup the output lost to the pandemic crises by early next year, it won’t be until at least 2023 that growth trends return to the pre-crisis path.
“The goal has to be to recover — not to levels before the crisis — but those we would have reached without the existence of this crisis,” De Cos, who is governor of the Bank of Spain, said yesterday.
In her comments to leaders, Lagarde reiterated her view that a looming increase in inflation this autumn will be temporary and underlying price pressures remain subdued. She said that more dynamic and sustainable growth is needed, and that monetary policy will continue to play a role in bolstering confidence.
“Upward pressures, most notably the comparison with last year’s data when a sales tax holiday in Germany applied from July to December, will almost certainly send the headline inflation reading soaring above 2% from August,” a Bloomberg Economics statement said.
The ECB predicts that euro-area output will return to pre-pandemic levels by the first quarter of 2022, one quarter earlier than expected in the spring. The risks to the outlook are now balanced.
Lagarde urged leaders to advance the EU’s capital markets and banking union, after years of talks failed to yield substantial progress. No breakthroughs were seen in yesterday’s summit either, as this autumn’s election in Germany has put discussions among euro-area officials on hold.