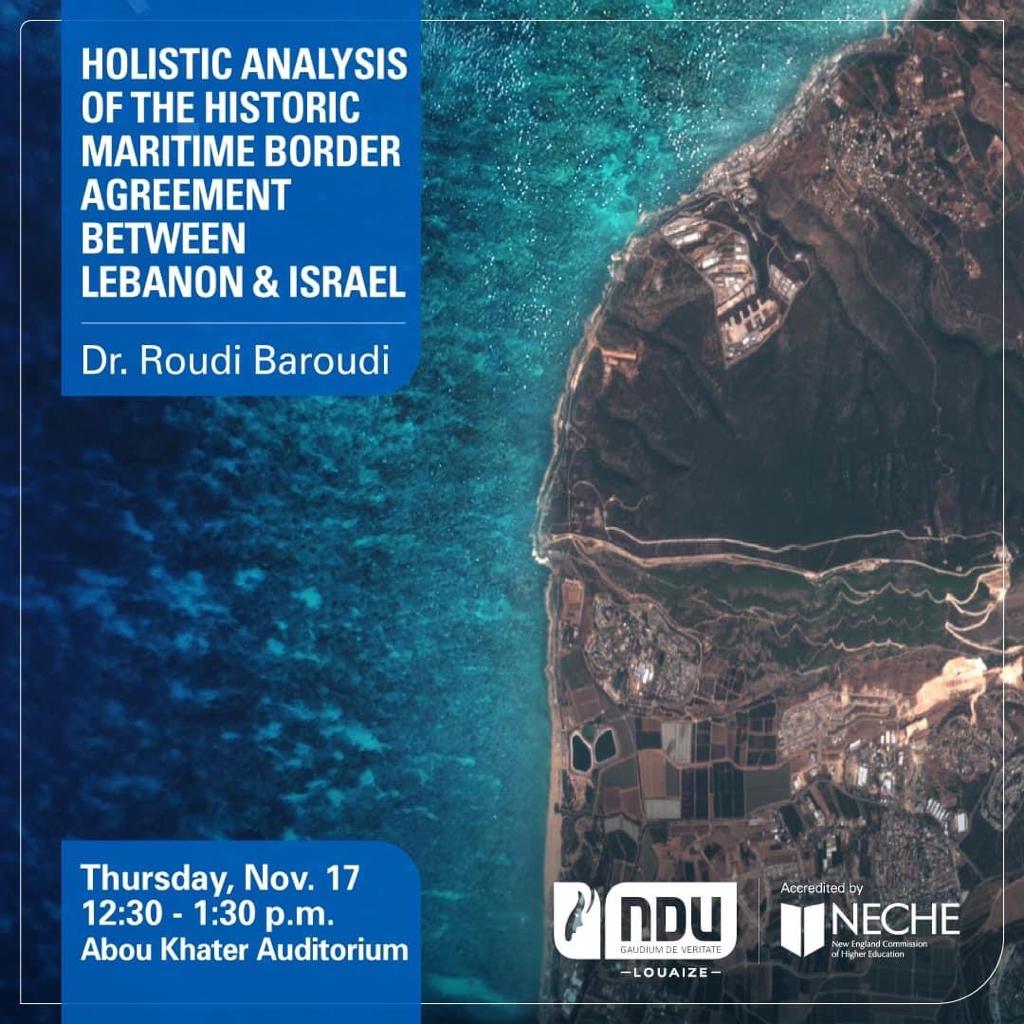 “BEIRUT (14 November 2022):” A four-decade veteran of the regional energy business will appear at Notre-Dame University of Louaize on November 17, 2022, to share unique insights and perspective on the recent US-mediated Lebanon-Israel maritime boundary agreement, the university announced on DAY.

Roudi Baroudi, a Doha-based author, economist, and executive who has advised major oil companies, governments, and multilateral agencies on energy policy, will provide a holistic analysis of this landmark achievement, including the creative diplomacy used to reach a deal, its potential impacts for Lebanon, and – based on exclusive mapping of the maritime area in question and – the precise beginning and end points of the agreed border at sea.

“The very fact of the deal’s existence is historic on its face,” Baroudi notes, “but what will the real implications be? Did Lebanon get a fair deal? What does the deal mean for the country’s prospects as a hydrocarbon producer? What will it do for the average Lebanese citizen?” The talk will address these and other potential ramifications of the agreement on a variety of fronts, including energy security, economic growth, and national security, as well as human and social development.

Working from the aforementioned maps, which are informed by both stringent scientific standards and common-sense interpretations of international law, Baroudi’s Executive Presentation will explain how US mediation was crucial to creating a one-of-a-kind de facto treaty that bypasses significant hurdles and confers several vital advantages on Lebanon. The structure of the agreement means, for instance, that it does not require parliamentary ratification, and that the necessary interactions going forward will be handled by a third-party company licensed to operate in the relevant parts of Lebanon’s Exclusive Economic Zone.

Among other benefits, these and other features get around the absence of official diplomatic relations between Lebanon and Israel, dilute domestic political squabbles in both countries that might have delayed implementation of the deal, and obviate the need for government-to-government engagement in order to operate the mechanisms agreed to. And as Baroudi will explain, the parties accepted a pragmatic solution to their continuing disagreement over the land terminus point of their border: since this spot is ordinarily used as a starting point for a maritime boundary line, the two sides opted instead for a line that begins well offshore. Baroudi’s talk will include, for the first time in a public forum, the precise location of that starting point. He will also outline the similar strategic omission used to sidestep the absence of an agreed “trijunction” where the EEZs of Lebanon, Israel, and Cyprus would converge on a map.

Roudi Baroudi, currently serves as CEO of Energy and Environment Holding, an independent consultancy based on Doha, has written extensively on the region, including “Maritime Boundaries in the Mediterranean: The Way Forward”, a 2021 book that called for the very sort of creative diplomacy used to reach the Lebanon-Israel agreement. His latest book – “Climate and Energy in the Mediterranean: What the Blue Economy Means for a Greener Future” (published by the TLN this year and distributed by Eurospan). Baroudi is also a Senior Fellow at the Transatlantic Leadership Network, a Washington, DC-based Think tank.