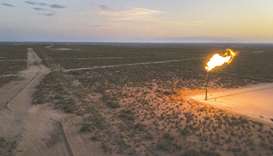 A sharp reduction in shale oil drilling because of crude’s crash could end up boosting US natural gas prices and potentially curb an oversupply in the global market for liquefied natural gas.
Oil markets have crashed by almost a third to less than $35 a barrel after the disintegration Friday of the Opec+ alliance, which has triggered a price war between Saudi Arabia and Russia. If the plunging price discourages shale oil drilling, the knock-on effect could be a cut in the supply of gas extracted as a byproduct, according to Goldman Sachs Group Inc.
If shale producers invest on the basis of $30-$45 per barrel of crude over the next 5 quarters, there will be about 1bn cubic feet a day less US gas production, said Goldman analysts including Brian Singer. That’s about 1% of US daily natural gas output in December.
“US producers tend to respond to prices with a lag of a couple of months, though we see the response time narrowing, given flexibility of shale and greater focus on free cash flow,” the Goldman analysts said.
Front-month US gas futures fell as much as 9.8 cents, or 5.7%, to $1.610 per million British thermal units, the lowest intraday level since August 27, 1998. Prices losing just 1/10th of a cent from there would put it at the lowest since September 1995.
The US is brimming with gas as production booms. This has been particularly acute in the Permian formation, where prices for gas extracted from oil drilling have tumbled below zero, meaning producers will pay others to take the fuel off their hands. Output from the West Texas and New Mexico shale play is rising faster than pipelines can be built to carry it away.
In Europe, which has boosted imports of US LNG, front-month benchmark Dutch prices were down 3.2% Monday after earlier falling as much as 5.8%.
If European gas prices “were to drop any further, we should see a downward adjustment in LNG exports from the US to Europe as exporters of spot cargoes would not be covering their operational costs,” said Carlos Torres Diaz, head of gas and power markets at Rystad Energy AS.
The plunge in oil may turn the global gas industry on its head. Gas supply contracts linked to oil prices, which have been out of favour as gas dropped faster than oil, will probably become attractive again. “You could certainly see gas prices in the US supported by low oil prices,” said Ciaran Roe, global director of LNG at S&P Global Platts, in an interview. Last year’s view where oil linkages were frowned upon “looks to be receding into the rear-view mirror.”