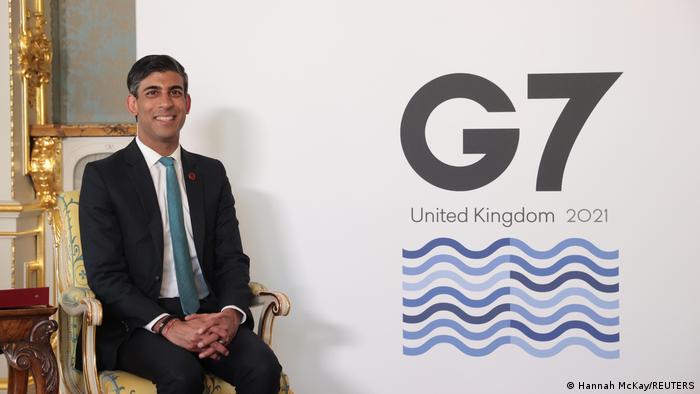 Finance ministers from the G7 countries met face-to-face for the first since the pandemic. A key issue on the agenda is possible tax rules for major multinationals.

Finance ministers from Group of Seven nations are meeting in London on Friday kicking off two days of talks, as the Europeans expressed optimism that a US-backed global minimum corporate tax rate was now “within sight.”

The meeting, chaired by British Chancellor of the Exchequer Rishi Sunak, will be the first time since the start of the pandemic that all seven ministers will get together in person.

However, because of COVID-19 restrictions, the delegation has been trimmed down and the seating plan has been reworked with the help of public health officials.

“I believe we can make significant progress in tackling some of the world’s most pressing economic challenges,” Sunak said shortly before the meeting began.

The talks are expected set the ground for the broad summit of G7 leaders, scheduled to take place in Cornwall, southwest England, starting on June 11.

What is the minimum global corporate tax?

The spotlight at the meeting will be on a global minimum corporate tax rate, proposed by the United States.

President Joe Biden has called for minimum corporate tax rate of 15%. If a company pays taxes somewhere with a lower rate, it would probably have to pay top-up taxes.

According to the proposal, the global minimum tax would be levied only on the world’s 100 largest and most profitable companies.

Britain, Germany and France have welcomed this approach in theory but want to ensure companies such as Amazon — which has lower profit margins than other tech firms — do not escape the net.

“All of them, and without exception” must be covered by the new rules, German Finance Minister Olaf Scholz told news agency Reuters.

The finance ministers also hoped an agreement could be reached at the broader G20 meeting which will be held in Venice in July.

There is broad support for the proposal among the European members of G7.

A deal on a minimum corporate tax rate is “within sight,” finance ministers from France, Germany, Italy and non-G7 member Spain said in The Guardian newspaper on Friday.

“For more than four years, France, Germany, Italy and Spain have been working together to create an international tax system fit for the 21st century,” the four ministers said. “It is a saga of many twists and turns. Now it’s time to come to an agreement.”

Japanese Finance Minister Taro Aso said earlier this week that he did not expect agreement on a specific minimum tax rate during this meeting.

Host nation Britain has been on the fence on the corporate tax issue, calling for wider tax reforms.

The UK also insists that companies should pay more tax where they make their sales, not just where they book profits, or locate their headquarters.

“Securing a global agreement on digital taxation has also been a key priority this year,” Sunak said in a statement. “We want companies to pay the right amount of tax in the right place, and I hope we can reach a fair deal with our partners.”

The US wants an end to the digital services taxes which the UK, France and Italy have levied, and which it views as unfairly targeting American tech giants for tax practices that European companies also use.

The issue of digital taxation has become a flashpoint in trade relations among the economic powers.