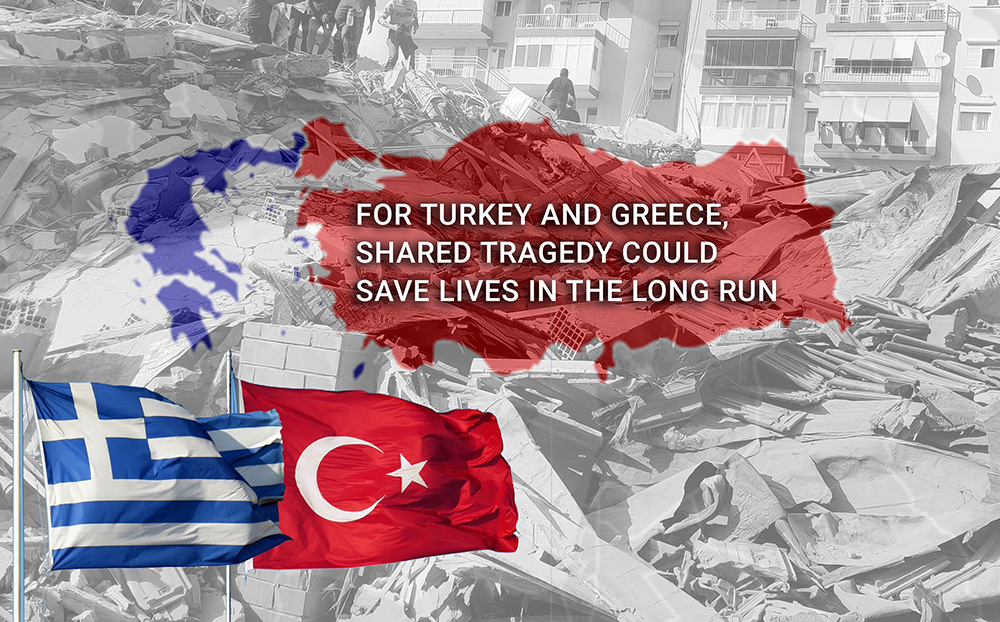 The deadly earthquake that struck Greece and Turkey on Friday has brought out the best in the two countries’ leaders, who have exchanged not only condolences, but also offers of assistance.

Like other natural disasters, this one showed no regard for national borders. Most of the casualties and damage took place in the Turkish city of Izmir, but the epicenter was located beneath the seabed in Greek waters, and the two Greek youths who perished did so on the island of Samos, which lies less than 2 kilometers off the Turkish coast. Far from discriminating between the two neighbors, then, the quake was a (literally) jarring reminder that their fates are inextricably intertwined.

And yet, the mutual goodwill expressed by Turkish President Recep Tayyip Erdogan and Greek Prime Minister Kyriakos Mitsokakis owed most of its newsworthiness to the acrimony which has otherwise defined their relationship of late: most of their recent exchanges have involved accusations and even thinly veiled threats over rival territorial claims at sea.

The dispute is not new, but in recent years its urgency has grown exponentially due to discoveries of enormous oil and (mostly) gas deposits in the Eastern Mediterranean. Far from eliciting offers to exchange resources and expertise – in a deepwater setting that will require massive upfront investment and world-class technical capabilities – the two sides have approached the matter as zero-sum game. Each is behaving as though any gains it achieves can only come by inflicting equal-size losses on the other, but given the realities of the dispute, nothing could be further from the truth.

Already, the mere fact of their having not progressed to negotiate a maritime border treaty – one allowing both parties to get on with the businesses of exploration and development in their respective zones, and perhaps in some joint areas as well – is costing a lot of money, and not just in terms of time lost to unnecessary delay. The absence of an agreement also means that whenever the Turks send their seismic research vessel, the Oruc Reis, to study the seabed in disputed waters, they also have to bear the cost of an armed escort. They may take solace in the fact that the Greek are also paying heavily to monitor their activities, but there are no winners in such a contest. Both countries are only ensuring that whoever eventually finds, extracts, and sells the resources in question, the venture will have been less profitable than it should have been.

Similar obstacles apply to just about any scenario in which Athens and Ankara fail to delineate a mutually acceptable border and try to act unilaterally. Investors loath uncertainty, so any offshore blocks they auction off will fetch less money than they would if the dispute were settled. Underwriters are equally suspicious of oil and gas operations in potential war zones, which means that even if insurance can be obtained for ships, drilling rigs, and any other equipment, the price is likely to be exorbitant – and this is not to mention the cost of liability coverage relating to life and limb, environmental consequences, etc.

Why would anyone opt for such a murky, risky, and uncertain venture when a much clearer, safer, and surer one is so close at hand? From any conventional business perspective, the far superior route is to negotiate a mutually beneficial solution that gives both parties the ability to make plans and implement them without fear of delay or interference.

A generation or two ago, there might have been an excuse for one or both countries to question the advisability of an early settlement, but not anymore: not when the United Nations Convention on the Law of the Sea (UNCLOS) sets out clear standards for the fair and equitable resolution of maritime boundary disputes; not when satellite imagery and data processing technologies allow virtually all nation-states to obtain high-precision maps ahead of time; not when we have such an extensive background of previous cases and established precedent to indicate in advance what an eventual settlement will look like.

If they have not already done so, both countries can commission a company like Fugro to carry out a Law of the Sea study and, within a few weeks, know within a few centimeters where their maritime boundaries should lie. If there are compelling reasons to alter the legal or data inputs that produce these results, they can negotiate swaps and/or designate certain areas for joint management or even shared sovereignty. Whatever the solution, it will be better than the bellicose rhetoric and high-seas brinkmanship on which they have recently relied.

Right now the priority has to be on search and rescue, saving any lives that can still be saved, taking care of those made homeless by the quake, and determining the full extent of the damage caused by the quake. Nothing should delay this process.

Once the danger has passed and the vulnerable have been secured, however, Greece and Turkey should follow their own example in this post-quake period by moving to defuse tensions and start talking about how to resolve their differences quickly, practically, and peacefully. Why waste any more time, expend any more resources, or risk any more lives when a negotiated solution is so easily obtainable?

Roudi Baroudi, a four-decade veteran of the energy business and CEO of Doha-based Energy and Environment Holding, is the author of “Maritime Disputes in the Eastern Mediterranean: The Way Forward”, published by the Transatlantic Leadership Network and distributed by the Brookings Institution Press.

Roudi Baroudi is CEO of Energy and Environment Holding, an independent consultancy based in Doha.
He also is the author of “Maritime Disputes in the Eastern Mediterranean: the Way Forward”, published earlier this year by the Transatlantic Leadership Network and distributed by the Brookings Institution Press.