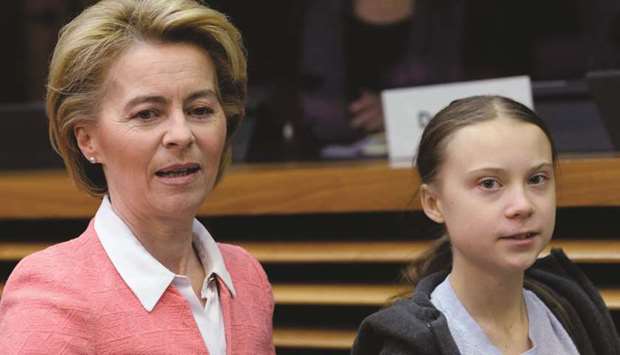 Europe wants to make it illegal by 2050 to emit more greenhouse gases than can be removed from the atmosphere.
European Commission President Ursula von der Leyen unveiled a draft law yesterday that would commit the region to become the first climate-neutral continent by the middle of the century. The legal proposal is the cornerstone of the bloc’s Green Deal, a far-reaching strategy that foresees a radical overhaul of the European economy over the next three decades.
“The Climate Law is the legal translation of our political commitment, and sets us irreversibly on the path to a more sustainable future,” von der Leyen said in a statement. “It offers predictability and transparency for European industry and investors. And it gives direction to our green growth strategy and guarantees that the transition will be gradual and fair.”
The draft measure proposes a binding target of net zero greenhouse gas emissions by 2050, with a revised target for 2030 to be put forward only later this year. That triggered criticism of the law by environmental activists, including Greta Thunberg, who called the law “surrender” because it doesn’t ensure more rapid action.
The commission has already started a deep analysis of the existing 2030 goal to cut emissions by at least 40% and aims to finish it by September, according to European Commission Vice President Frans Timmermans. Von der Leyen pledged to increase it to 50% or even 55%.
“Once we’ve done this work, we’ll propose an amendment to the climate law that we’re presenting today and we’ll put the 2030 target there as well,” Timmermans told a press conference in Brussels yesterday. The clash over the path to get to net-zero emissions highlights the challenges policy makers face as they seek to balance business interests with the ambitions of an ever-growing green movement. Fighting climate change has catapulted to the top of the EU’s agenda, with 93% of Europeans seeing global warming as a serious problem.
The Green Deal was designed to appease these concerns and become a new growth strategy for the 27-nation bloc. But regulatory proposals by the EU’s executive arm are subject to approval by member states, and the climate law reflects the need to seek a compromise between competing national positions. With differing energy mixes, wealth and industrial strength, EU governments are set to wrangle over every bit of the climate strategy and the draft law that will set the basis for the clean-up.
However, the dynamics may change with the draft measure. It will pave the way for a new regulatory track where measures to cut emissions avoid a veto by a single country, a tool that was used several times by coal-dependent Poland to halt ambitious policies.
Once approved by national governments and the European Parliament, the climate law will start a regulatory frenzy. Everything from energy production to agriculture and the design of cities will be overhauled under the Green Deal strategy that von der Leyen has described as a moonshot. “I’m excited by this,” said Peter Vis, senior adviser at Rud Pedersen Public Affairs in Brussels. “Von der Leyen is setting the ambition without knowing how we will get there. But when Kennedy committed to putting a man on the moon he also wouldn’t know if that is possible.”
Here are the main elements of the draft law:
* EU-wide emissions and removals of greenhouse gases must be balanced by 2050 at the latest
* Member states must take necessary steps to enable collective achievement of the goal by the EU
* Commission will review the current 2030 emission-reduction goal by September, exploring options for a new goal of 50%-55%
* By June 2021, commission will assess how to amend various rules on emissions, including a law on the bloc’s carbon market
* By September 2023, the commission will every five years assess the progress made by member states following global stock-takes under the Paris Agreement to protect the climate
* Commission may propose new climate targets every five years following the assessments; trajectory to get to climate neutrality will start with the goal for 2030
The EU executive is also seeking more powers to make sure the bloc delivers on the net-zero emissions goal, making it more difficult for governments and the EU Parliament to object to intermediate targets. It wants to regulate those goals via measures known as delegated acts. To oppose them, a qualified majority of votes is needed in the Council of the EU, which represents member states, and a majority in the Parliament.
The biggest challenge for Europe will be to secure investment for the environmental clean-up. The costs are dizzying: to reach the existing 2030 goal Europe needs investment of €260bn ($290bn) annually.
Earlier this year, the commission proposed a 1tn-euro plan designed to be the financing pillar of the Green Deal. It envisions earmarking around €500bn from the EU budget for the clean shift over the next decade, while separately leveraging €280bn of private and public investment and establishing a funding mechanism with another €143bn, also from public and private sources, to help regions facing the most costly clean-ups.
To ensure the Green Deal materialises to be Europe’s new growth strategy, new markets must be developed, with both public and private finance flowing to small and large companies alike to help them deploy first new technologies, according to Marco Mensink, director general of the chemical industry association Cefic.
“The proposal for a climate law is an important first step to achieve investor confidence, which is crucial,” Mensink said. “It is a start of an important journey; our sector must go through a deep transformation, within only one or two investment cycles, for which we need enabling conditions. Therefore, much more is needed.”