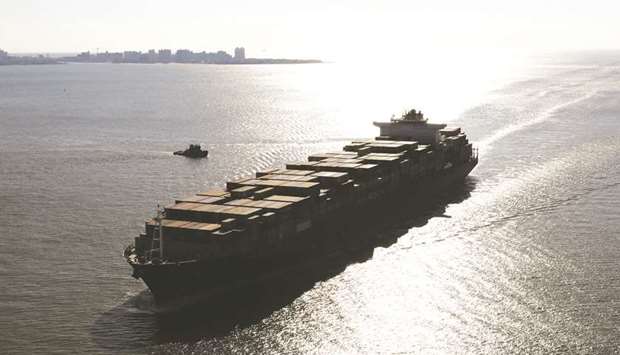 A tweak to new environmental rules for the shipping industry is just days from taking effect, closing off a loophole for would-be cheats looking to cut their fuel bills.
Starting March 1, shippers will be prohibited from carrying highly sulphurous marine fuel for later consumption at sea, far from the eyes of regulators. It builds upon broader rules, widely known as IMO 2020, which have restricted vessels from burning such fuel since the start of the year.
The alteration means port authorities the world over can pounce on vessels that have non-compliant fuel on board for use on the high seas. Until now, carrying such cargo has been allowed, meaning individual vessels could save thousands of dollars every day by cheating.
“We expect fairly high compliance in North America and Europe, but lower compliance outside those major bunkering hubs, especially in Asia, Africa the Middle East and, to some extent, Latin America,” said Mark Williams, principal analyst for short-term refining and oil product markets at Wood Mackenzie Ltd.
While most of the big-name shippers are already complying with the sulphur cap, others might not be so scrupulous, Williams said. For example, a tanker carrying high-sulphur fuel could discharge the product onto another vessel via a ship-to-ship transfer in the open ocean. With no regulatory authorities around to interfere, the receiving vessel could then sail away, burning cheap, non-compliant fuel. Still, the actual number of cheats is likely to be small.
The International Maritime Organization, part of the UN, established its low-sulphur rule and the carriage ban as a way to cut down on sulphur, a pollutant that has been linked to issues from acid rain to asthma. It’s the most far-reaching change in years for both the shipping industry and fuel-producing refiners.
This year, Wood Mackenzie expects the vast majority of the world’s marine fuel burned by shippers to comply with IMO regulations. The carriage ban will likely increase compliance, but only to a limited extent, Williams said. As recently as December, a long list of countries hadn’t signed on to the sulphur limit, hampering enforcement of those rules.
The UAE, home to the bunkering port of Fujairah, has said it will take a flexible approach. Others have said the sulphur cap and the accompanying carriage ban will be applied without exception.
While the price gap between the old and new fuels has narrowed, the temptation to cheat for some must still be acute. A 10-year-old Capesize iron ore carrier can consume 62 tons of fuel a day, according to data from Clarkson Research Services Ltd. So far this year, one of the main new products, very-low sulphur fuel oil, costs an average of about $223 a tonne more in Rotterdam than the old kind, meaning a saving of almost $14,000 a day. That saving has declined in recent days.
To put that in context, some of the vessels are now making heavy losses. The carriers are earning just under $2,400 a day from charters, according to data from the Baltic Exchange in London. That’s far below what they need just to cover basic running costs like crew, insurance and repairs – let alone repay bank loans or eke out a profit.
China’s shipping association said this week that it wanted the sulphur cap delayed because the coronavirus has hit the industry’s finances hard. Marine fuel demand in February has been cut by 2mn tonnes amid a halt in activity at the country’s ports, according to Energy Aspects Ltd. The IMO said a delay won’t be possible because the rules are already under way.
The coronavirus has complicated efforts to prepare some ships for the March 1 deadline because of contingency measures at some ports, especially in eastern Asia, according to Lars Robert Pedersen, deputy secretary general of shipping industry group BIMCO.
“We expect that the vast majority of ships are prepared for the carriage ban date,” he said.