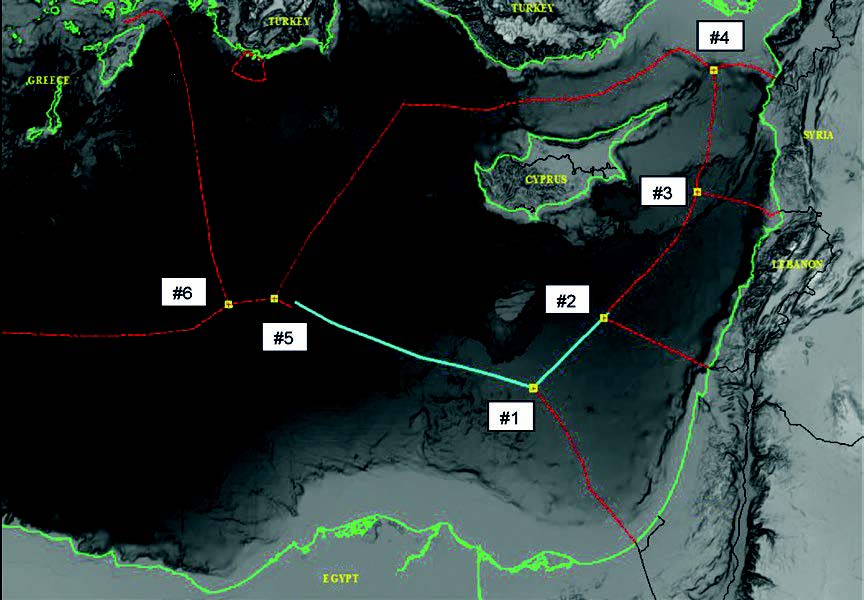 BEIRUT: The Eastern Mediterranean could emerge as both a global energy hub and a powerful endorsement of international law if its coastal states get smart about settling their maritime boundaries, a new research report argues.

Written by four-decade energy-industry veteran Roudi Baroudi and published in conjunction with the American University of Beirut’s Issam Fares Institute (IFI), “Unlocking Peace and Prosperity: How to Resolve Maritime Border Disputes in the Eastern Mediterranean Sea” offers both multi-dimensional analysis and straightforward conclusions.

Baroudi starts by describing the region’s proved and potential reserves of undersea oil and (mostly) gas, specifically how the safe and effective exploitation of these resources could transform both national economies and the often troubled relationships among the country’s seven states (Greece, Turkey, Syria, Cyprus, Lebanon, Palestine/Israel, and Egypt). He then explains how outstanding border disputes have severely curtailed offshore exploration and development in most of the region – and how the resulting tensions could lead to further instability and even war.

The report then details the prospects for resolving these disputes, demonstrating that despite much of what currently passes for conventional wisdom, the tools for the job are both relatively straightforward and readily available. The key, Baroudi, asserts, is that the governments in question need to embrace, once and for all, the bedrock principle of the United Nations and the entire international system built up since World War II: the peaceful resolution of disputes. Once that happens, his research indicates that a combination of law, science, and technology makes maritime boundary delineation a simple and even predictable process that benefits all parties.

In short, the report argues that although some critics have lost patience with the rules-based system fostered by the UN since 1945, we actually are on the cusp of discovering the full extent of that system’s utility – not just in preventing armed conflict, but even in removing some of the most common reasons for disputes in the first place. Theoretically at least, this system means that small nations are no longer at the mercy of larger ones because all have access to the same legal remedies and the tools to exercise these.

In the case of maritime boundaries, the primary implement is the United Nations Convention on the Law of the Sea (UNCLOS), which lays down the legal standards and scientific measurements by which offshore boundaries are to be drawn. The vast majority of the world’s countries are signatories to UNCLOS, and even those that are not remain subject to at least some of its tenets, and/or to the jurisdiction of institutions like the International Court of Justice (ICJ). Over the past couple of decades, the ICJ and other courts, as well as various treaties, negotiations, and arbitration findings, have established a large body of precedents that take the guesswork out of border delineation, giving more countries greater incentive to subject their legitimate claims to qualified scrutiny.

As if all this were not enough, the report also outlines how technological advances now make it possible for geographical features – even deep beneath the waves – to be mapped with unprecedented accuracy, meaning that setting maritime borders is virtual child’s play. And even if the actual border can’t be agreed for some reason (probably an arcane political one), the modern legal toolbox also includes mechanisms by which rival claimants can share revenues or at least stay out of each other’s way until such time as they can end their disputes. All that’s missing, Baroudi says, are the good sense and the good will for national leaderships to reach such conclusions an act accordingly.

Once they do, he contends, the results – in the Eastern Med, at least – could be genuinely game-changing. Each of the new gas producers would lower their national energy costs and generate significant revenues from production and/or exports, and even non-producing nations stand to benefit by hosting processing or transport facilities. In a best-case scenario, the luckiest countries might accede to a regional revenue-sharing plan. These financial improvements would allow long-overdue investments in education, healthcare, transport, and poverty reduction. All the while, with their respective economic interests more closely aligned and therefore similarly dependent on regional stability, each of the usual antagonists (e.g. Israel vs. Lebanon, Turkey vs. Cyprus, Greece vs. Turkey, etc.) would have an ongoing incentive to minimize frictions that might derail the energy boom.

A Lebanese national, Baroudi currently serves as CEO of Energy and Environment Holding, an independent consultancy based in Doha, Qatar. Having made a career out of advising companies, governments, and multilateral entities on a energy policy, his recent focus has been on ensuring that his homeland’s nascent energy industry gets off to a healthy start by preventing local corruption, avoiding international disputes, and securing the participation of major international oil companies. As a result of his frequent media and conference appearances, he has become one of the most prominent proponents for the “peace dividends” that regional energy development would pay to all East Mediterranean countries.

Established in 2006, the IFI emphasizes independent research into public policy and international affairs, as well as “bridging the gap between academia and policymaking”, particularly as these regard the Arab world. Its self-set objectives include making an impact by “informing policymaking processes and influencing the public debate”.