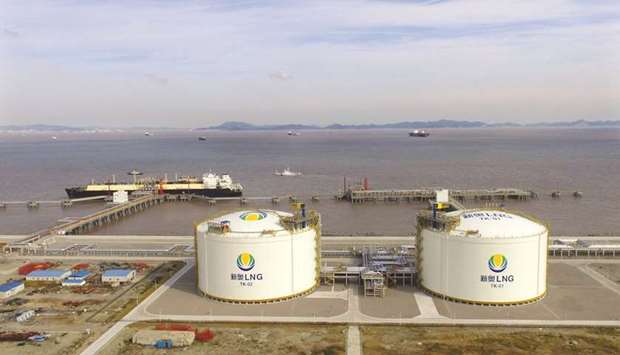 China’s imports of liquefied natural gas (LNG) rose to another monthly record in January, even as the country grapples with high gas inventories amid a warmer-than-usual winter, according to shipping data and industry sources.
The world’s second-largest LNG importer took 6.55mn tonnes of LNG in January, beating the previous record hit in December by nearly 2%, according to Refinitiv Eikon shipping data.
China’s imports last year surged 41% from 2017 after gas shortages the previous winter prompted Chinese companies to stock up on supplies and pre-order cargoes, with Beijing continuing to push millions of households to switch to gas from coal for heating.
But the import growth is not wholly due to a rise in demand, said an industry source familiar with the Chinese market.
“When people see these numbers, they think Chinese demand is up… but actually it is causing a headache (for importers) as (they) have overbought and can’t find demand to absorb the cargoes,” the source said, declining to be identified as he was not authorised to speak with media.
China National Offshore Oil Corp (CNOOC) resold at least one LNG cargo in January and possibly another, an unusual move during what is typically a peak demand period and highlighting this year’s warmer weather, industry sources said.
Chinese traders are offering LNG cargoes to international buyers or selling into their domestic market at lower-than-expected prices, the first source said. The Lunar New Year holiday has also made the situation worse because factories are shutdown for a least a week, he said.
Wholesale LNG from small, land-based liquefaction plants fell to 3,500-3,950 yuan ($519-$586) a tonne on February 2, less than half levels of last year, according to Chinese gas-price monitoring agency yeslng.com.
Quotes at receiving terminals in East China’s Shandong and North China’s Tianjin last stood at 4,500 yuan ($667) a tonne, down 17% and 5%, respectively, from late November, shortly after heating season started.
China’s gas demand growth should decelerate from the past two years, said James Taverner of energy consultancy IHS Markit.
“Coal-to-gas switching mandates are moderating due to… security of supply concerns, and weakening economic growth,” Taverner said.
There is also limited capacity in North China for further LNG ramp-up after big increases the past two years, he said. Trade tensions between the United States and China have also tightened financial conditions, dragging China’s growth last year to its weakest in 28 years.