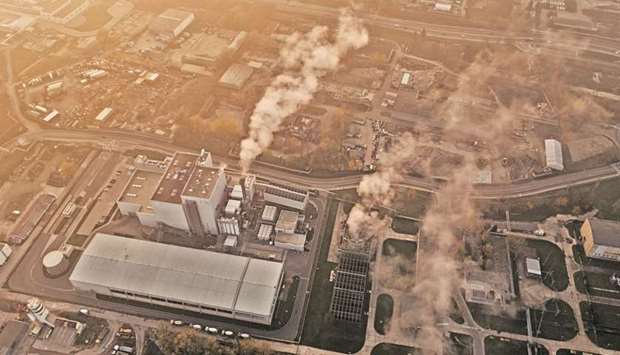 • A fair proposal for reducing emissions would go some way towards reassuring that we do not live on another planet. And it would give everyone a greater incentive to save this one

With President Joe Biden’s administration recommitting the United States to the Paris climate agreement, and with a major United Nations climate-change conference (COP26) coming later this year, there is new hope for meaningful global policies to meet the challenge. But while mounting evidence of increasing climate volatility – unprecedented wildfires in Australia, droughts in California and Sub-Saharan Africa, intensifying hurricane and cyclone seasons – suggests that we must move fast in curbing planet-warming greenhouse-gas (GHG) emissions, there are serious impediments to concluding any new global accord.
Economists generally agree that the way to reduce GHG emissions is to tax them. But such taxes almost certainly will cause disruptive economic changes in the short run, which is why discussions of imposing them tend to run quickly into free-rider or fairness problems.
For example, industrialised countries such as the US are concerned that while they work hard to reduce emissions, developing countries will keep pumping them out with abandon. But at the same time, developing countries like Uganda point out that there is profound inequity in asking a country that emitted just 0.13 tonnes of carbon dioxide per capita in 2017 to bear the same burden as the US or Saudi Arabia, with their respective per capita emissions of 16 and 17.5 tonnes.
The least costly way to reduce global emissions would be to give every country similar incentives. While India should not keep building more dirty coal plants as it grows, Europe should be closing down the plants it already has. But each country will want to reduce emissions in its own way – some through taxation, others through regulation. The question, then, is how to balance national-level priorities with global needs so that we can save the one world we have.
The economic solution is simple: a global carbon incentive (GCI). Every country that emits more than the global average of around five tonnes per capita would pay annually into a global incentive fund, with the amount calculated by multiplying the excess emissions per capita by the population and the GCI. If the GCI started at $10 per tonne, the US would pay around $36 billion, and Saudi Arabia would pay $4.6 billion.
Meanwhile, countries below the global per capita average would receive a commensurate payout (Uganda, for example, would receive around $2.1 billion). This way, every country would face an effective loss of $10 per capita for every additional tonne that it emits per capita, regardless of whether it started at a high, low, or average level. There would no longer be a free-rider problem, because Uganda would have the same incentives to economise on emissions as the US.
The GCI also would address the fairness problem. Low emitters, which are often the poorest countries and the ones most vulnerable to climatic changes they did not cause, would receive a payment with which they could help their people adapt. If the GCI is raised over time, the collective sums paid out would approach the $100 billion per year that rich countries promised to poor countries at COP15 in 2009. That would far exceed the meagre sums that have been made available thus far. Better still, the GCI would assign responsibility for payments in a feasible way, because big emitters typically are in the best position to pay.
Moreover, the GCI would not snuff out domestic experimentation. It recognises that what a country does domestically is its own business. Instead of levying a politically unpopular carbon tax, one country might impose prohibitive regulations on coal, another might tax energy inputs, and a third might incentivise renewables. Each one charts its own course, while the GCI supplements whatever moral incentives are already driving action at the country level.
The beauty of the GCI is its simplicity and self-financing structure. But it would require one adjustment in how per capita emissions are computed. What is consumed is as important as how it is produced, so there will need to be some accounting for the portion of emissions embedded in imported goods; these will need to be added to the importer’s emissions tally and subtracted from the exporter’s.
Also, most experts would regard a $10 GCI as too low. But the point is to start small in order to get the scheme going and iron out the kinks. After that, the GCI can easily be raised by common agreement (or reduced, if there were some miraculous breakthrough in emissions-reduction technology). But to avoid creating uncertainty after an initial period of calibration, changes might be considered only every five years or so.
What about alternative proposals that have global effects? Some industrialised countries plan to impose a domestic carbon tax alongside a border-adjustment tax, effectively applying the same tax rate to goods coming in from countries that do not have a carbon tax. The border taxes might push other countries to impose their own carbon taxes, but it certainly would not improve fairness. On the contrary, they would let large importing countries impose their tax preferences on poor exporting countries and might serve as a Trojan horse for protectionism.
To be sure, the bureaucrats who dominate international meetings will want to dismiss this proposal as “interesting but simplistic” (or words to that effect). The most powerful countries are also the biggest emitters, and few want to pay into a global fund, especially in these times of massive budget overruns.
But a GCI is by far the best option available. As rich countries cast about for remedies to domestic inequality, they should spare a thought for inequality between countries, which the pandemic and the unequal vaccine rollout will only worsen. Developing countries feel abandoned today. A fair proposal for reducing emissions would go some way toward reassuring them that they do not live on another planet. And it would give everyone a greater incentive to save this one.
– Project Syndicate

• Raghuram G Rajan, former governor of the Reserve Bank of India, is Professor of Finance at the University of Chicago Booth School of Business and the author, most recently, of The Third Pillar: How Markets and the State Leave the Community Behind.