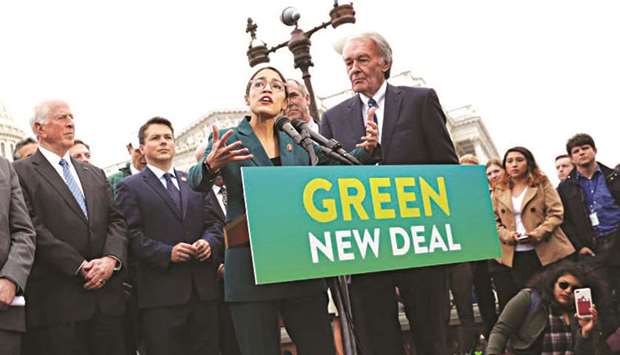 By Mark Paul And Anthony Underwood/Sarasota

Climate change is the world’s most urgent problem, and in the United States, the left, at least, is taking it seriously.
Earlier this year, Representative Alexandria Ocasio-Cortez of New York and Senator Edward Markey of Massachusetts, both Democrats, introduced a Green New Deal (GND) resolution, which offers a blueprint for decarbonising the US economy. But while a growing number of Democratic presidential contenders have endorsed their proposal, centrist Democrats and Republicans continue to cling to a different climate-policy approach.
The key centrist proposal, in keeping with the prevailing neoliberal dispensation, is a carbon tax. The idea is simple: if you tax fossil fuels where they enter the economy – be it at a wellhead, mine, or port – you can fully capture the social cost of pollution. In economic parlance, this is known as a Pigovian tax, because it is meant to correct an undesirable outcome in the market, or what the British economist Arthur Pigou defined as a negative externality – in this case, the greenhouse-gas emissions that are responsible for global warming.
As a response to climate change, a carbon tax is immensely popular among economists from across the political spectrum, and it does have an important role to play. But it is far from sufficient. Rapidly decarbonising the economy in a way that is economically equitable and politically feasible will require a comprehensive package on the order of the GND. That means combining some market-based policies with large-scale private- and public-sector investments and carefully crafted environmental regulations.
Even in this case, including a standard carbon tax involves certain risks. Just ask French President Emmanuel Macron, whose country has been roiled by months of demonstrations that were initially launched in response to a new tax on diesel fuel. The lesson from the weekly “yellow vests” protests is clear: unless environmental policies account for today’s high levels of inequality, voters will reject them.
Nonetheless, as progressives push for more green investment, they will look to the carbon tax as a source of revenue. After all, depending on the size, it could raise almost a trillion dollars per year. But rather than a straightforward levy, they should consider implementing a carbon dividend, whereby carbon would be taxed, but the proceeds would be returned to the people in equal shares. Yes, this would preclude one option for funding the GND; but it would ensure that the transition to a carbon-free economy remains on track, by protecting the incomes of low- and middle-class households.
A common objection to a carbon dividend is that it would defeat the original purpose of a carbon price, which is to encourage people to reduce emissions. But this isn’t true. To see why, suppose you are a low-income American, currently spending $75 per month on gas. Assuming that your driving behaviour does not change, a carbon tax of $230 per ton – the level needed just to put us on a path toward limiting global warming to 2.5? C above pre-industrial levels – would raise your monthly fuel expenditure by $59, to $134, or 79%. In this case, you unquestionably will feel poorer. This is what economists call an “income effect.”
Now imagine that a carbon dividend is in place: you would receive a monthly payment of $187, more than offsetting the price increase, and leaving you feeling richer. But wouldn’t this also leave you with a greater incentive to use gasoline? Economic theory suggests not.
Just because the price of gas increases does not mean that everything else in the economy will follow suit. Rather, goods and services that produce a lot of carbon dioxide emissions will become relatively more expensive than those that do not. Hence, you would have a choice between using the dividend to drive more and using it to increase your consumption of other things, from dinners with friends to new running shoes. Those social gatherings and shoes are your incentive to use less carbon. This is what economists call the “substitution effect.”
In this way, a carbon dividend would gradually nudge people, large businesses, and the government away from carbon-intensive consumption and toward activities and investments that reduce their emissions. Equally important, a carbon dividend would protect the poor. A straightforward carbon tax is inherently regressive, because it imposes the same cost on the poor as it does on the rich. But a carbon dividend inverts this effect, because every dollar that is returned will be worth more to a low-income household than it will be to a wealthy one.
Moreover, it is the rich who fly all over the world, heat and cool enormous homes, and drive inefficient sports cars. Because they lead far more carbon-intensive lifestyles than everyone else, they would contribute far more per capita to the carbon dividend. More to the point, they would pay in much more than they get back, while the poorest 60% of Americans would get back more than they put in.
In short, a carbon dividend would distribute money from predominantly wealthy high polluters to predominantly low- and middle-income low polluters, all while reducing CO2 emissions. On its own, it would represent a smart step in the right direction – one that wouldn’t invite a “yellow vest” reaction. But don’t let anyone tell you it’s a silver bullet. When it comes to climate change, there isn’t one. – Project Syndicate