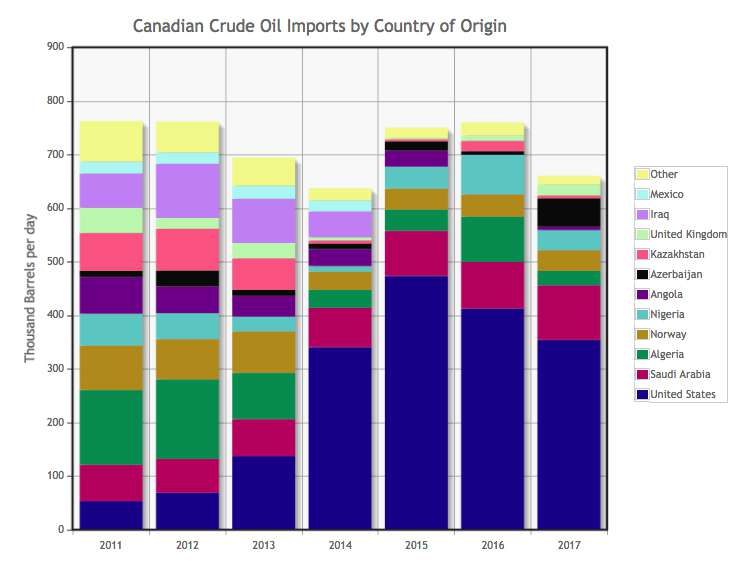 Despite sitting on an ocean of oil, Canada still buys $300 million per month of Saudi crude

As Saudi Arabia aggressively severs ties with Canada, the two countries’ trade relationship hangs in the balance. On one hand, Canada will lose out on Saudi foreign students, military contracts and sales of wheat and grain. On the other, Saudi Arabia will lose the billions of dollars it earns every year by selling oil to Canada.

For years, it has been an oft-repeated Alberta grievance that these imports exist at all. Despite sitting atop an ocean of proven oil reserves, Canada continues to spend a small fortune every year buying oil from a country that executes homosexuals, flogs dissidents and has a nasty habit of funding Islamic extremism.

Below, a quick guide to why Canadians are still gassing up their cars with Saudi crude.

Over the last 10 years, Canada has spent $20.9 billion on Saudi crude
Between 2007 and 2017, Statistics Canada figures show that Canada imported a total of $20.9 billion of Saudi Arabian petroleum oils. For context, this is almost precisely what Canada spends on its military per year. It’s also way more than the expected $15.7 billion cost of the Energy East pipeline. On average, in recent years, Saudi Arabia supplies about 10 per cent of Canada’s oil imports. Canada, in turn, is responsible for buying roughly 1.5 per cent of total Saudi oil exports. What’s more, Saudi Arabia is climbing the leader board of countries that Canada’s relies upon for its foreign oil. As recently as 2010, Saudi Arabia ranked as Canada’s fifth largest supplier of foreign oil (behind Algeria, Norway, the U.K. and Kazakhstan). Now, Saudi Arabia is second only to the United States.

Right now, all the Saudi oil is coming through a single New Brunswick refinery
All of the Saudi oil imported into Canada in 2017 and 2018 came through New Brunswick, which only has one oil import facility: The massive Irving Oil-owned Saint John refinery. Between January and June of this year that refinery has imported $1.8 billion of Saudi oil — roughly $10 million per day. The amount of U.S. oil entering the refinery, for comparison, is equivalent only to about $3.8 million per day. Unlike most Canadian refineries, Saint John has no access to a pipeline; every barrel of oil it processes either comes by tanker or train. (The oil train that caused the Lac-Mégantic rail disaster, in fact, was headed to the Saint John refinery). “We source crude oil from all over the world for our refinery in Saint John, N.B.,” a spokesman for Irving Oil told the National Post in 2016. And whenever someone is seeking out the cheapest product from the world market, it’s not unusual that a lot of it is going to come from oil-rich Saudi Arabia. It’s like turning to the world market to buy the cheapest possible t-shirts: Chances are that they’re going to come from Bangladesh.

Alberta and Saudi oil aren’t necessarily the same thing
On paper, Canada could become energy self-sufficient tomorrow. Every day we produce about 3.9 million barrels of oil per day, and use less than 2 million barrels. A study this year from the Canadian Energy Research Institute even calculated that energy self-sufficiency might reduce emissions. But think of oil like whiskey: There are many different types and qualities. A bourbon connoisseur probably isn’t going to be happy with a bottle of Old Crow and a Manhattan isn’t going to taste the same if it’s made out of Scotch. Similarly, Alberta oil is not interchangeable with the stuff coming out of Saudi Arabia. Andrew Leach, an energy economist at the University of Alberta, even said that comparing the two is like comparing apples and oranges. “Saudi crude and WCS (Western Canadian Select) doesn’t overlap much in terms of their markets,” he told the National Post. For one thing, most eastern Canadian refineries cannot process bitumen, the thick tar-like hydrocarbon that comes out of the Athabasca Oil Sands. Almost anybody can process Saudi Arabian crude, but only an elite fraternity of the world’s most complex refineries can turn Alberta bitumen into gasoline. To get to the east coast, Canadian bitumen also has to be shipped overland from more than 4,000 kilometres away, significantly adding to its total costs (Saudi Arabia is 10,000 kilometres away from the Canadian east coast, but tanker shipment is cheap). It’s also why Western Canadian Select, the industry name for most oil sands bitumen, sells at such a steep discount to more conventional oil types coming out of Saudi Arabia. In June, for instance, WCS sold at an average of USD$52.10 a barrel, compared to USD$67.87 for West Texas Intermediate (WTI), an oil category priced similarly to most Middle Eastern oils. “The oil Alberta produces is simply of a lower quality than … WTI, and is located farther away from customers,” writes the Alberta government in an online briefing note describing the WCS “discount.”

Even with a pipeline, it’s not a guarantee that refineries would buy Canadian
The cancelled Energy East pipeline, of course, would have pumped Saskatchewan and Alberta petroleum into New Brunswick. Politicians touted the pipeline as a way to supplant foreign suppliers such as Saudi Arabia. “We believe this nation-building project would have benefited all of Canada through new jobs, investment, energy security and the ability to displace oil being imported into Canada from overseas,” Alberta premier Rachel Notley said upon the project’s cancellation. However, refineries are no different than a driver cruising gas stations looking for a fill-up: They seek out whoever has the best price and buy accordingly. If Alberta can’t sell its oil on the Atlantic Coast for a lower price than Saudi Arabia, refineries aren’t going to buy it — particularly if they can’t process it. “Getting product from Western Canada, while conceptually sounding like a good way to push out Saudi oil, doesn’t fix everything,” said Jason Parent with the Canadian oil industry analyst Kent Group. As of press time, WCS is currently selling at an incredible $30 discount over more conventional oil types. While this would likely be enough to entice Atlantic buyers, the discount isn’t always so competitive — particularly if Saudi Arabia is actively trying to overproduce and drop oil prices in order to kneecap the Canadian and U.S. oil industry. This is part of the reason why Canada never built a pipeline to the east coast in the first place. A west-to-east pipeline was indeed considered soon after the discovery of oil in Alberta in the 1940s, but it was soon scrapped. “Eastern provinces did the math and found it cheaper to import foreign oil by tanker, rather than bother with the extra cost of domestic supply,” said Peter Tertzakian, director of the Calgary-based Arc Energy Research Institute. However, even if the business case is a little complicated, Tertzakian still advocates a pipeline as something Canada should do for strategic reasons. “We could be completely self sufficient if we wanted,” he said. “It’s just a question of how much we are willing to pay for it.”

Canada can’t really hurt Saudi Arabia’s bottom line
The easiest way for Canada to cut off Saudi Arabia imports would be simply to buy more American oil. It’s about the same price, it doesn’t require specialized facilities and considering that they already buy so much of ours, there’s a certain justice to it. The U.S. also has an excellent human rights record compared to the Saudis. But while such a move might assuage Canada’s moral compass, the practical effect would be almost nil. It’s a seller’s market for oil right now. Production of U.S. shale oil is slowing down, Iran is being hammered by sanctions and petroleum demand continues to tick upwards all over the world. All this means that if Canada could successfully prevent a drop of Saudi oil from ever entering our borders again, it’s unlikely that Riyadh would ever notice. Any oil tanker turned away at Saint John could simply set course for New Jersey. Unlike Canada, Saudi Arabia sells a product that is easy to transport and that can be processed by almost anyone. Said Andrew Leach, “Saudi oil will still sell at the world price.”