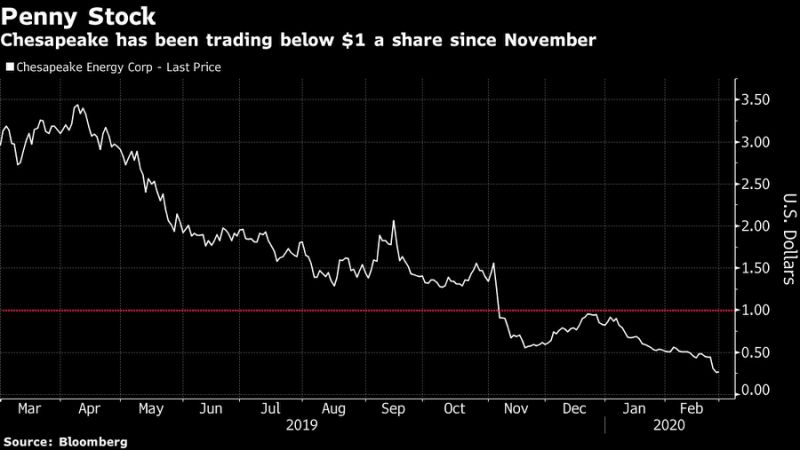 The coronavirus outbreak that has sent markets worldwide on a collective nosedive is forcing U.S. oil and gas explorers already burning through borrowed cash and failing to deliver returns to the brink of distress.

Drillers’ fall from grace has worsened as shareholders increasingly demand they shift their focus to generating cash flow, instead of increasing production at any costs. Now, as bonds collapse, they face the double whammy of upset investors on both sides of capital markets — equity and debt.

The stocks of U.S. explorers are on average worth just a quarter of their peak in mid 2014, when oil started plunging from more than $100 a barrel. The S&P Oil & Gas Exploration and Production Index has plunged 82% since.

“The market has not really been open, or certainly hasn’t been bullish, for energy companies for a long time now,” Spencer Cutter, an analyst for Bloomberg Intelligence, said in an interview Thursday.

High-yield energy has lost nearly 8% this year, compared to a loss of only 0.8% for the broad category of high-risk borrowers, according to Bloomberg Barclays data. Energy is the biggest contributor to $105 billion of outstanding high-yield debt trading at distressed levels, with a distressed ratio of about 26%, according to Bloomberg Intelligence

Chesapeake Energy Corp., Whiting Petroleum Corp. and Gulfport Energy Corp. this week became the face of this dramatic change of fortune since the heyday of the shale boom and Gulf of Mexico exploration.

Once at the vanguard of the U.S. shale revolution, Chesapeake has fallen headlong toward collapse as it and rival drillers flooded the U.S. with excess natural gas, crushing prices and destroying billions of dollars in value.

Its options for dealing with its towering debt load are scant. Chief Executive Officer Doug Lawler mapped out a survival strategy predicated on a sweeping divestiture program that must be consummated within months in a market already glutted with North American gas holdings.

Chesapeake’s shares have all but evaporated in value, trading below 30 cents. It’s 11.5% bonds maturing in 2025 have plunged 28% this week to 57 cents on the dollar. The yield on the security, a measure of how much investors will demand in gains to take the risk of holding it for a year, has surged to almost 30%, about the same level as government bonds from troubled Lebanon.

Whiting’s stock is down 75% this year amid reports that the oil producer is holding discussions with advisers to review its capital structure. The Denver-based company is looking at a potential debt exchange, Debtwire reported this month, citing people familiar with the matter.

Whiting and Chesapeake are among the names that are “poorly positioned” if an economic downturn were to push oil to $40 a barrel and natural gas to $1.75 per million British thermal units, analysts at Scotiabank wrote earlier this week in a note to investors.

Gulfport bonds, along with Chesapeake’s and Whiting’s, were among the energy debt securities that most tanked this week.

Earlier this month, Piper Sandler & Co. downgraded Gulfport Energy to neutral telling investors in a note: “darkness has devolved into pitch black” for the firm’s outlook on the natural gas market.

Its shares have followed Chesapeake into penny stock territory, closing Friday at little more than 80 cents, after a 35% plunge this week.