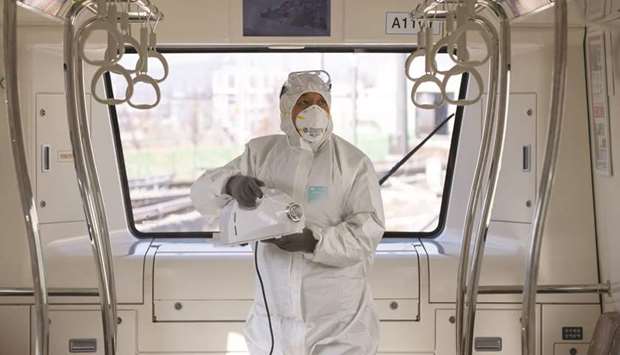 The US gave into pressure from Europeans over environmental concerns, allowing the word “climate” into a joint communique at a conference overshadowed by a viral outbreak that’s shaken the global economy.
Delegates at the G20 meeting in Riyadh spent much of their time talking about a global slowdown exacerbated by the coronavirus outbreak, but struggled to come up with a united response, according to people familiar with the deliberations. Countries such as Japan, and institutions including the Organisation for Economic Co-operation and Development, have been pushing for those with surpluses to spend more.
One of the main addressees of the calls for more spending is Germany. So far, the export-driven country has showed little interest in significantly boosting expenditures, arguing fiscal stimulus can’t bolster foreign demand.
On climate change, differences of opinion in the Saudi capital were more stark. The US, represented by Treasury Secretary Steven Mnuchin, objected to including a reference to the subject, according to four people familiar with the communique-drafting process. The Saudi delegation, which is hosting the event, didn’t show much enthusiasm for it either, according to two of them.
After several days of heated debate, including France finance chief Bruno Le Maire cornering Mnuchin late on Saturday in Riyadh as the G20 economic leaders dined, the US reluctantly agreed to a mention of climate change, according to two people familiar with the matter.
A Treasury spokeswoman didn’t reply to a request for comment.
As of Sunday morning in Riyadh, it was also looking unlikely that representatives would leave Saudi Arabia with any breakthroughs on a global taxation system that would apply to multi-national companies including tech giants like Alphabet Inc’s Google and Facebook Inc, according to the people.
Europeans have baulked at a US proposal that new global rules should be a “safe harbour” regime. Mnuchin sought to reassure his counterpart by insisting such a system would not mean the rules would be optional, but Europeans said they still needed to fully assess the proposal.
If there’s no agreement, several European nations will go ahead with taxes on revenues of multinational digital firms. That could spark a transatlantic trade war as the US says such measures are discriminatory and has already threatened France with tariffs.
France and the US have held tense discussions on the subject since France introduced a 3% levy last year on the digital revenue of companies that make their sales primarily online. The move was supposed to give impetus to international talks to redefine tax rules, and the government has pledged to abolish its national tax if there is agreement on such rules.
In introducing a so-called global minimum tax — a measure intended to prevent large companies from shifting profits to low-tax locales to avoid paying them at home — the sides are closer to compromise as there’s little difference among current corporate tax rates among major economies, and little concern that the minimum tax would be too low, one person said.