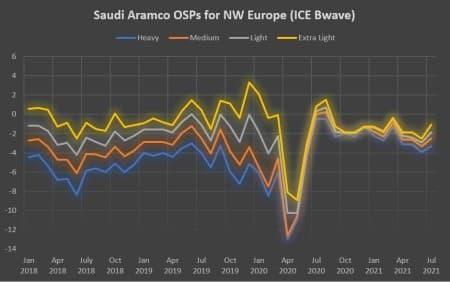 (Bloomberg) — Soaring temperatures in one of the world’s top energy-producing regions could drive fuel prices higher as countries there burn more oil and natural gas to keep homes cool.

Saudi Arabia, the United Arab Emirates and Kuwait are all experiencing weather that’s hotter than normal. That has coincided with a tightened crude market, with the Organization of Petroleum Exporting Countries and its allies continuing to hold back millions of barrels of supply.

“Demand this summer will be stronger than last year,” Ahmed Mehdi, a Middle East analyst at the Oxford Institute for Energy Studies, said of the region.

Temperatures in the oil-producing states around the Persian Gulf can reach 50 degrees Celsius (122 Fahrenheit) during the region’s steamiest months of July and August. Top OPEC producer Saudi Arabia burned as much as 25% more crude in its power plants last year and said at the time that it could use up to 1 million barrels a day to generate electricity.

Energy use rose across the region in 2020 as coronavirus lockdowns kept residents at home through the torrid summer months — when many usually travel — and the enduring restrictions mean many are still staying put.

Oil is currently trading around $70 a barrel as much of the world recovers from the pandemic and the OPEC+ alliance keeps barrels off the market. OPEC’s own analysis indicates that crude consumption is rising faster than supply, forcing buyers to pull barrels out of storage.

Gulf producers are using more natural gas for power as well, and as OPEC+ gradually restores oil output, countries like Saudi Arabia and Iraq are pumping more of the fuel that’s found together with the crude.

The Gulf states have taken steps to prepare for oppressive heat and to make their energy infrastructure more efficient — and more profitable. Kuwait is set to start a liquefied natural gas import facility, while the United Arab Emirates connected its first nuclear power plant to the national grid this year.

For now, OPEC+ isn’t committing to more crude supply. The group decided at a meeting this month to go ahead with an already agreed output increase for July, but stopped short of allowing a further hike. That will leave Saudi Arabia and its neighbors buying more of what they’re producing without necessarily providing the market any extra slack.

“OPEC+ is still sitting on more than 5 million barrels a day of spare capacity, mostly in the Gulf and particularly Saudi Arabia,” said Carole Nakhle, chief executive officer of London-based consulting firm Crystol Energy. “The Saudis can do what they want,” though pumping more crude just to burn it for power isn’t their best option, she said.

Subscribe now to stay ahead with the most trusted business news source.