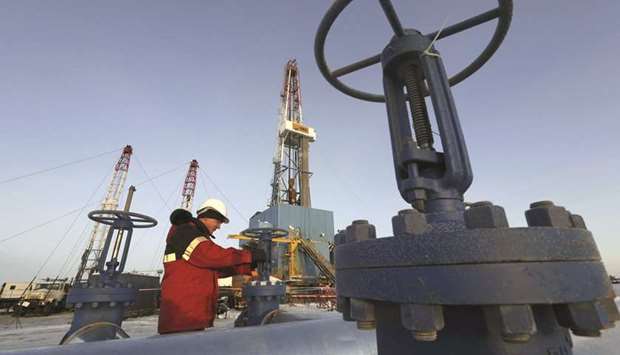 Russia’s oil production increased to a five-month high in January following an agreement with the Opec+ alliance to exclude condensate from its quota.
The nation pumped 47.72mn tonnes of crude and condensate – a light oil extracted from natural gas – last month, Interfax reported, citing preliminary data from the Energy Ministry’s CDU-TEK unit. The figure, which may be rounded, equates to about 11.28mn barrels a day on average, based on the standard 7.33 barrels-per-tonne conversion ratio.
The CDU-TEK data usually doesn’t provide a separate figure for crude production, so it can’t be used to gauge Russia’s compliance with promised output cuts. In December, the country successfully lobbied the Organisation of Petroleum Exporting Countries and its allies to exclude condensate from its quota.
Energy Minister Alexander Novak has insisted the exclusion isn’t a loophole, and that Russia will be transparent about its oil production. Last month, the ministry published December figures that showed how Russia may disclose its compliance. While the statement was less detailed than the CDU-TEK data, it split output cuts into crude and condensate, compared with the respective October 2018 baselines.
Russia has pledged to cut its crude-only output by 298,000 barrels a day this quarter, from a baseline of 10.626mn barrels a day. The nation was not far from meeting that target in December, the Energy Ministry said, reporting crude-only cuts of 234,000 barrels a day.
Russia largely failed to meet its obligations in 2019 under the previous Opec+ deal. It attributed that failure to challenging weather and geological conditions in winter, the temporary shutdown of the Druzhba oil pipeline and growing condensate output at gas projects. Russia’s main gas producers Novatek PJSC and Gazprom PJSC have been bringing new fields online and expanding existing projects to ramp up exports to markets in Europe and Asia.