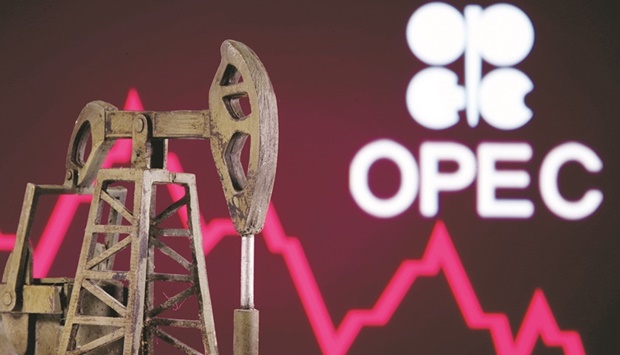 Opec+ is set to stick this week to its monthly modest oil output increases despite seeing tighter global markets, five Opec+ sources said on Wednesday as the group fast approaches its maximum production capacity.
Oil prices rallied above $124 per barrel this week following new EU sanctions against Russia over its invasion of Ukraine and China’s recovery from the latest Covid-19 lockdown.
The world’s most industrialised countries, known as G7, called again this week on Opec to help ease a global energy crunch that worsened as a result of Western sanctions imposed on Russia.
Opec, which meets on Thursday together with allies such as Russia as part of a group called Opec+, has repeatedly rebuffed calls for faster production increases. Opec+ is widely expected to raise July output targets by 432,000 bpd.
The group’s record output-cutting deal, clinched in 2020 at the height of global lockdowns, expires this September by which time the group will have limited spare capacity to increase production further.
Its lead member Saudi Arabia is producing 10.5mn bpd and has rarely tested sustained production levels above 11mn bpd.
Together with fellow Gulf Opec member, the United Arab Emirates, Opec is estimated to have less than 2mn bpd of spare capacity.
“There is not much spare oil in the market to replace potential lost barrels from Russia,” said Bjarne Schieldrop, chief commodities analyst at SEB bank.
He said the EU ban will likely result in Russia selling less oil but at a higher price and probably earning just as much if not more.
Western sanctions imposed on Russia may result in production and export cuts from the world’s second largest oil exporter of as much as 2mn-3mn bpd, according to various estimates.
However, Russian production has been holding strong so far as Moscow said it is managing to re-route volumes from Europe to Asian buyers, hungry for Russian oil, which sells at a steep discount.
The Wall Street Journal reported on Tuesday, citing Opec delegates, that some Opec members were considering the idea of suspending Russia from the deal to allow other producers to pump significantly more crude as sought by the United States and European nations.
The report came as US diplomats work on organising President Joe Biden first visit to Riyadh after two years of strained relations.
Two Opec+ sources told Reuters an Opec+ technical meeting on Wednesday did not discuss the idea of suspending Russia from the deal.
Six other Opec+ delegates said the idea was not being discussed by the group.
Russian Foreign Minister Sergei Lavrov, on a visit to Saudi Arabia, said on Wednesday that Opec+ co-operation was relevant for Russia.
Opec+ expects an oil market surplus of 1.4mn barrels per day (bpd) in 2022, 500,000 bpd less than previously forecast, two Opec+ sources told Reuters on Wednesday.