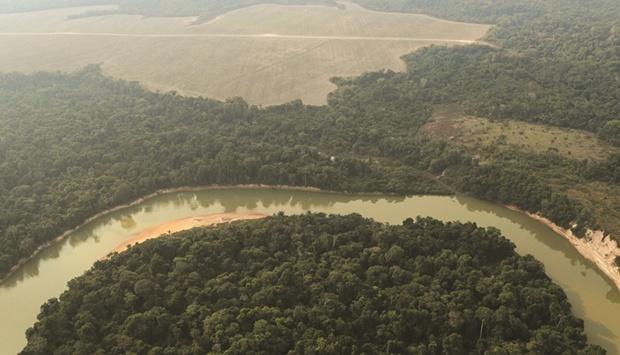 No net zero without nature

Businesses, investors, and governments that are serious about fulfilling net-zero emissions pledges before 2050 should be rushing to protect, conserve, and regenerate the natural resources and ecosystems that support our economic growth, food security, health, and climate. Yet there appear to be worryingly few trailblazers out there.
Worse, we are quickly running out of time. The science makes clear that to avoid the most catastrophic effects of climate change and to build resilience against the effects that are already inevitable, we must end biodiversity loss before 2030. That means establishing lasting conservation for at least 30% of land and sea areas within eight years, and then charting a course toward living in harmony with nature by 2050.
Though the challenge is massive, ignoring it makes no sense from a business perspective. A World Economic Forum white paper estimates that nature-positive policies “could generate an estimated $10tn in new annual business value and create 395mn jobs by 2030.” Among other things, such policies would use precision-agriculture technologies to improve crop yields – diversifying diets with more fruit and vegetables in the process – and boost agroforestry and peatland restoration.
A nature-positive approach can also be more cost-effective. For example, the Dasgupta Review (the Final Report of the United Kingdom’s Independent Review on the Economics of Biodiversity) finds that green infrastructure like salt marshes and mangroves are 2-5 times cheaper than grey infrastructure such as breakwaters.
Nonetheless, private-sector action is lagging, including in economic sectors where the health of value chains is closely tied to that of nature. That is one key finding from an analysis just released by the UN Climate Change High-Level Champions, Global Canopy, Rainforest Alliance, and others.
Out of 148 major companies assessed, only nine – or 6% – are making strong progress to end deforestation. Among them are the Brazilian paper and pulp producer Suzano and five of the largest consumer goods companies: Nestlé, PepsiCo, Unilever, Mars, and Colgate-Palmolive.
Unilever, for example, is committed to a deforestation-free supply chain by 2023, and thus is focusing on palm oil, paper and board, tea, soy, and cocoa, as these contribute to more than 65% of its impact on land. Nestlé has now made over 97% of its primary meat, palm oil, pulp and paper, soy, and sugar supply chains deforestation-free. And PepsiCo aims to implement regenerative farming across the equivalent of its agricultural footprint by 2030, and to end deforestation and development on peat.
These are positive steps, but they represent exceptions, rather than any new normal. Moreover, the financial sector has also been slow to turn nature-positive. Since the COP26 climate-change conference in Glasgow last year, only 35 financial firms have committed to tackle agricultural commodity-driven deforestation by 2025. The hope now is that more firms will join the deforestation commitment by COP27 this November. Under the umbrella of the Glasgow Financial Alliance for Net Zero, 500 financial firms (representing $135tn in assets) have committed to halving their portfolios’ emissions by 2030 and reaching net zero by 2050. And now, the Alliance has issued new net-zero guidance that includes recommended policies for addressing deforestation.
Nature functions as a kind of global capital, and protecting it should be a no-brainer for businesses, investors, and governments. The World Economic Forum finds that “$44tn of economic value generation – over half the world’s total GDP – is moderately or highly dependent on nature and its services.” But this profound source of value is increasingly at risk, as demonstrated by the current food crisis, which is driven not just by the war in Ukraine but also by climate-related disasters such as drought and India’s extreme heatwave, locust swarms in East Africa, and floods in China.
Businesses increasingly have the tools to start addressing these kinds of problems. Recently, the Science Based Targets initiative released a methodology for targeting emissions related to food, land, and agriculture. Capital for Climate’s Nature-Based Solutions Investment platform helps financiers identify opportunities to invest in nature with competitive returns. And the Business for Nature coalition is exploring additional moves the private sector can make.
Governments have also taken steps in the right direction. At COP26, countries accounting for over 90% of the world’s forests endorsed a leaders’ declaration to halt forest loss and land degradation by 2030. And a dozen countries pledged to provide $12bn in public finance for forests by 2025, and to do more to leverage private finance for the same purpose. They can now start meeting those commitments ahead of COP27 in Sharm El-Sheikh, by enacting the necessary policies, establishing the right incentives, and delivering on their financial promises.
Meanwhile, the UN-backed Race to Zero and Race to Resilience campaigns will continue working in parallel, helping businesses, investors, cities, and regions put conservation of nature at the heart of their work to decarbonise and build resilience. The five strong corporate performers on deforestation are in the Race to Zero, and the campaign’s recently strengthened criteria will pressure other members to do more to use biodiversity sustainably and align their activities and financing with climate-resilient development.
The world is watching to see if the latest promises of climate action are robust and credible. By investing in nature now, governments and companies can show that they are offering more than words. – Project Syndicate