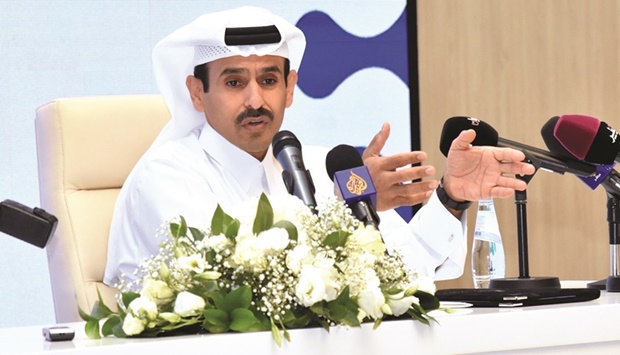 Qatar’s North Field East (NFE) project will produce significant quantities of ethane, LPG, condensate and helium besides liquefied natural gas, HE the Minister of State for Energy Saad bin Sherida al-Kaabi has said.
Addressing a press conference at the QatarEnergy on Monday he said the expected production of LNG from the nearly $29bn project would be 32.6mn tonnes annually.
The production of ethane from the project would amount to 1.5mn tonnes per year (tpy), LPG 4mn tpy, 250,000 barrels per day of condensate and 5,000 tpy of helium.
In reply to a question by Gulf Times on Sunday, al-Kaabi said the multi-billion dollar North Field expansion, the largest LNG development in global history, will generate substantial revenues for Qatar and hugely contribute to the country’s GDP.
QatarEnergy has selected ConocoPhillips as a partner in the North Field East (NFE) expansion project, the single largest project in the history of the LNG industry.
This is the third in a series of announcements on partnerships in the $28.75bn expansion project.
Pursuant to the agreement signed yesterday, QatarEnergy and ConocoPhillips will become partners in a new joint venture company (JV), in which QatarEnergy will hold a 75% interest while ConocoPhillips will hold the remaining 25% interest.
The JV in turn will own 12.5% of the entire NFE project, which has a total LNG capacity of 32mn tonnes per year.
The NFE project employs the highest health, safety, and environmental standards, including carbon capture and sequestration, to reduce the project’s overall carbon footprint to the lowest levels possible.
More partners are slated to join the NFE project, QatarEnergy said yesterday.