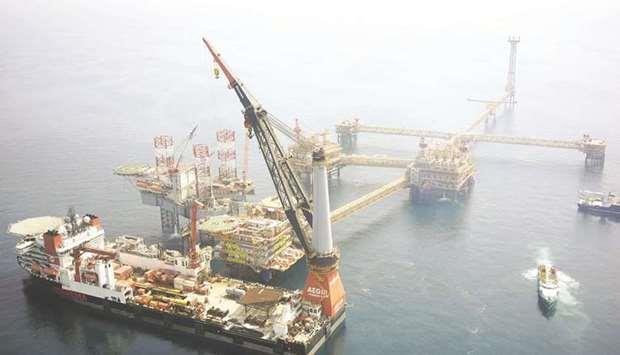 A Qatar Financial Centre (QFC) newcomer will establish its position as a global portfolio manager of spot LNG, or liquefied natural gas trades that will have immediate local knock-on effects, after Doha expands its LNG production from the present 110mn tonnes per annum.
This outcome is one among the “unsung” economic benefits that will follow North Field Expansion (NFE), which is also set to enhance the prospects of asset management industry in the country, the QFC said in an article.
The NFE project will not only bring up natural gas from underground, but also other valuable hydrocarbons for export and domestic use, it said, pointing out that associated hydrocarbons destined for export include 260,000 barrels per day of condensate and 11,000t/d of liquefied petroleum gas, valued at roughly $3.05bn annually (using posted 2020 average prices).
“The additional income earned through hydrocarbon exports will increasingly make Qatar a destination for asset managers and other financial institutions,” the QFC said. As imports of construction inputs and machinery wane with most infrastructure projects coming close to completion, Qatar’s trade surplus is likely to register bigger in the years ahead.
“Once NFE-related exports commence in late 2025, export earnings are destined to reach still higher. Whereas much of the immediate proceeds are destined to the Ministry of Finance and Qatar Investment Authority, there is a progressively stronger case for specialised asset managers to locate in Doha close to their future investors,” QFC said.
In tandem, it said, financial institutions in the country will increasingly be called upon to provide a variety of sophisticated products to Qatari firms with a growing international footprint.
As Qatar’s economy continues to grow at home in terms of complexity, and abroad with its varied connections, the financial sector is set to grow substantially.
As Qatar looks ahead, it is destined to leverage its natural gas-focused competitive cost advantages, global network, existing industrial base, innovative focus and high-profile investments to become an attractive and rewarding business destination.
The QFC plays a key part of the country’s development journey, which it looks forward to supporting with vigour and indirectly offering firms on its platform noteworthy prospects.
The first certain phase concerns the North Field East that comprises an approximate $28.75bn of investments – half of which has received a final investment decision as of February 2021.
Beyond that, Qatar Petroleum, or QP, is appraising different areas of the North Field to possibly award a subsequent expansion phase within the next three years.
The QP has made this NFE investment at an opportune time, which will allow it to capture more global LNG market share and gain footholds in new markets as many competitors pull back from major projects, according to the QFC article.
Another “unsung” benefit is the North field’s expansion would drive local manufacturing opportunities. Additionally, there will be 4,000t/y of ethane for use as feedstock in Qatar’s growing petrochemicals sector. This hike equates to nearly 50% of existing 2020 export capacity, or 36.4% of current domestic base quantities.
A combination of these NFE ethane volumes and those from Barzan enables Qatar to produce in future a greater variety as well as more complex petrochemicals, such as those that will originate from the joint venture with Chevron Phillips (70% owned by QP) using the Middle East’s largest 1.9mn t/y ethane cracker in Ras Laffan to start production in 2025.
This is critical to the local economy, according to Gulf Petrochemicals and Chemicals Association, which recently outlined that with oil at $65 a barrel, crude producers can earn $15 per barrel by refining their output and an extra $30 a barrel on top of that by converting it into petrochemicals.
“As Qatar continues its drive to diversify economically, local manufacturing will play a key role,” the QFC article said.