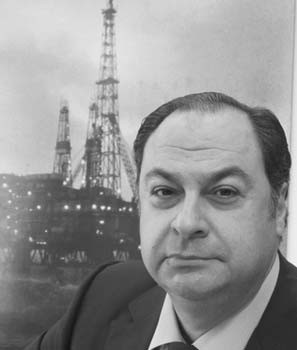 Lebanon is presented with the most serious challenges it has faced in the past decade. The economy is struggling, the internal security situation is deteriorating and the country’s neighbors pose real threats. In these circumstances the very fact that the country continues to operate can be seen as a success. And amidst everything, there are opportunities — not just in newfound offshore oil and gas but also within the country’s ingenious population.

As we head into 2013, what can be done to help the country unite, to overcome its challenges and ultimately to grow? Over the course of this week, eight influential figures will address seven important topics, each suggesting one proposal to help the country move forward. In this article, the World Energy Council’s Roudi Baroudi calls for measures to protect the country’s offshore oil and gas from corruption.

My one hope for Lebanon in 2013 is that all of its various political leaders and factions take and/or allow the necessary steps for sound and sustainable development of the country’s newly promising energy sector.

Why? Because virtually all of the measures involved a) are just common sense; b) require little or no investment of scarce public resources; and c) happen to be the same changes required to reform, rebuild and genuinely reconcile Lebanon as a whole.

On the overall energy front, the first change would have to be one of mindset. For too long, the sector has been treated by officials, their relatives and their cronies as a cash-cow for themselves rather than as an essential ingredient in building and operating a modern nation-state. From heavy industry to the average family, everyone is affected by the chronic power shortfall. We are more than a decade into the 21st century: doing homework by candlelight should be the stuff of tales told by grandparents, not the current experiences of schoolchildren also learning to use computers. Imagine if those tasked with formulating and implementing energy policy were concerned at last with basic public goals: namely, how best to deliver affordable, reliable and sustainable energy (electricity, LPG “cooking gas”, gasoline, diesel oil, fuel oil) to all Lebanese.

In turn, this new attitude could quickly convince Lebanese politicians of the need to follow the law by forming a regulatory authority for electricity, and one for the nascent oil and gas industry as well. This would go hand in hand with a government newly determined to ensure transparency, for instance by disseminating all available general information and specific knowledge about the process(es) by which the future of the oil and gas sector is being planned and managed.

The same enlightened leadership would seek out and adopt the best practices at every stage of its oil and gas venture, starting at the beginning. For example, Lebanon should spend its taxpayers’ money wisely by restricting its paid advertising to globally recognized industry publications and highly regarded professional and financial publications like the Economist and the Financial Times, and using the websites of the World Bank and the European Commission – for free – in order to ensure the broadest possible international awareness of the country’s hydrocarbon potential. The government could then consult the latter two bodies and other reputable institutions to help understand the experiences of other emerging energy powers and avoid making the same costly mistakes.

Thus animated, not just by the need to closely monitor oil and gas developments, but also by its duty to keep the public informed, the Ministry of Energy and Water would secure timely and professional analysis of the seismic studies immediately following their completion – then, based on these findings, publish the next steps approved by the government in order to pursue development of the fields.

In addition, with the seismic results in hand, the ministry could commission a well-known and qualified international consulting firm to prepare a comprehensive energy master-plan encompassing the entire industry and each of its sub-sectors. The electricity subsector component would be based on a long-term, least-cost expansion of generation and transmission which would take into account feasible grid interconnections with other countries in the region, the role of renewable energy, and integration of the environmental and climate change dimensions to demonstrate Lebanon’s strategy for reducing its carbon footprints in its production and use of energy.

When it comes to the implementation of specific projects, the ministry would act diligently to ensure not only that all necessary environmental impact studies were being carried out, but also that the implementation of mitigating measures was done in accordance with both international best practice and the requisite environmental and social guidelines applicable in Lebanon.

The same spirit of respecting the law and pursuing the national interest also would cause Lebanese politicians, whatever their party loyalties, to avidly support the continued reform of the judiciary, an acceleration of nominations to fill judicial vacancies, and other measures designed to strengthen the rule of law. All of these steps would magnify the impact of the others by helping to ensure that pieces of legislation passed by Lebanon’s Parliament are no longer regarded as idle suggestions to be ignored at will.

All of the foregoing – flowing from the original wish that Lebanon’s main political actors would stop obstructing oil and gas progress – would ensure a dynamic and profitable energy sector capable of alleviating many national problems, especially poverty. Properly managed, oil and gas would supply ample revenues for decades to come, providing the Lebanese state and Lebanese society with the resources they need to finally end the twin evils of systematic inequality and sectarian resentment.

If we really want our grandchildren not to be doing their homework by candlelight, then real change is needed. With simple steps and more enlightened leadership, we can start to make it happen in 2013.