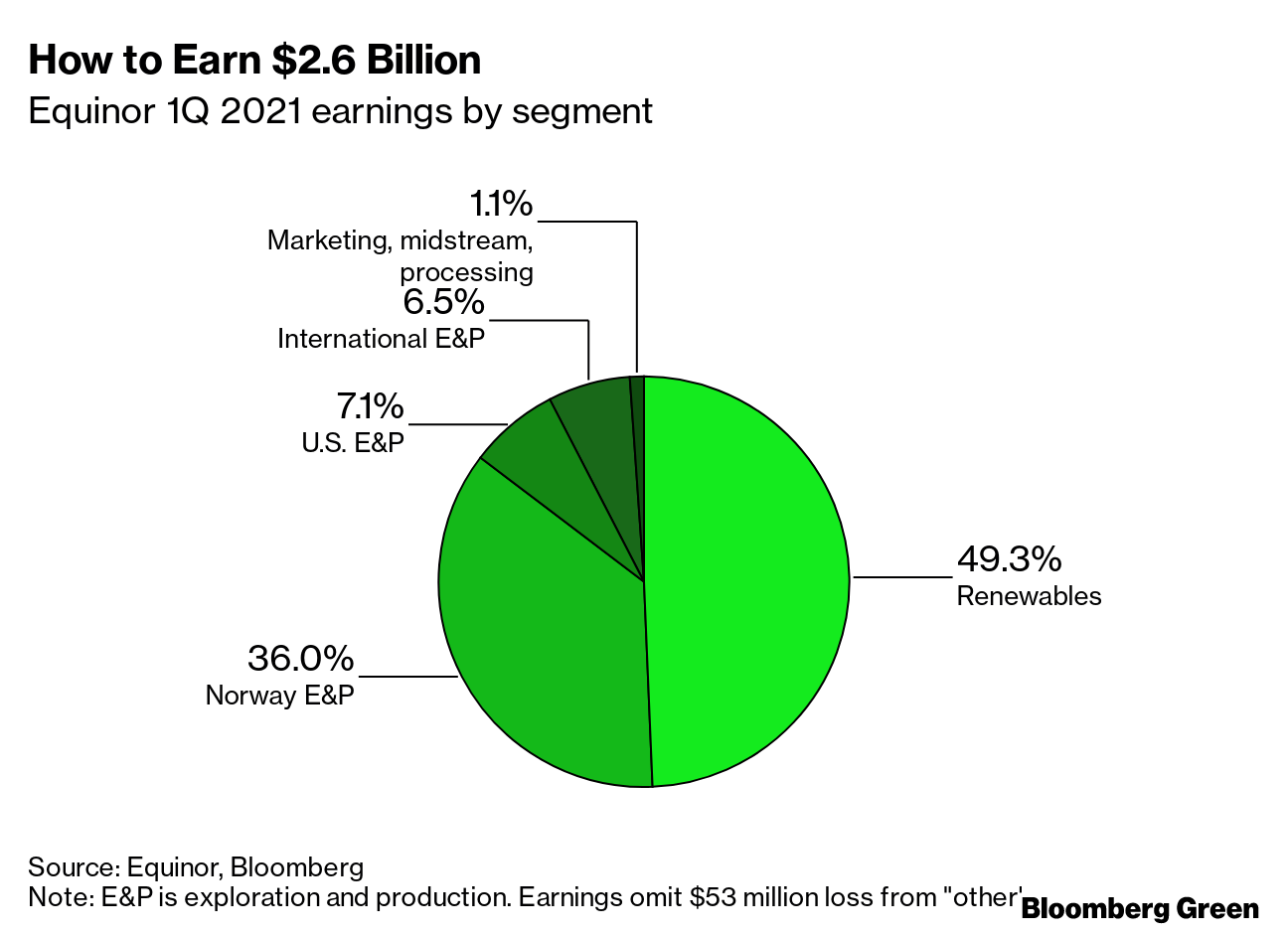 Last week a raft of oil majors released their first-quarter results, with companies like Royal Dutch Shell Plc showing a return to pre-pandemic profit levels. At the same time, some of the majors increased their energy transition commitments: as my Bloomberg Intelligence colleagues Salih Yilmaz and Will Hares noted on Twitter, Spanish firm Repsol SA devoted 40% of its capital expenditure to low-carbon projects, and France’s Total SE stated plans to increase its renewable energy capacity five-fold over the next four years.

There are energy-transition commitments, though, and then there are energy-transition results. And on the latter side, one company shines: Norway’s state-owned oil producer, Equinor ASA. It posted more than $2.6 billion of earnings in the first quarter of 2021, 49% of which was from renewable energy. Last quarter, Equinor earned more from renewables than it did from oil and gas exploration and production.

But Equinor’s results are more than evidence of a successful renewable-energy strategy. They’re also a sign of the challenge ahead for other oil majors with similar ambitions.

Equinor’s capital gains in renewables came from “farm downs,” i.e. the selling of assets at various stages of development to new owners. (Another term for farm down is “asset rotation,” which I discussed last week.) Equinor divested a 50% interest in two U.S. offshore wind projects and a 10% interest in two U.K. offshore wind farms. While asset rotation is slowing down in the power utility sector, it seems to be working fine for Equinor.

Therein lies the challenge for Big Oil’s energy transition plans. Equinor’s way to benefit from renewable-energy assets is, essentially, to put in the early work of developing them—and then reap the cash benefits of selling them to others.

Importantly, early wind development is more time-dependent and expertise-dependent than it is capital-dependent. Equinor’s U.S. wind assets are the result of its success in the country’s 2018 offshore-lease auction, when it won stakes with a bid of $135 million. In its latest earnings statement, the company says BP paid $1.2 billion for those same assets, netting the Norwegian company $1 billion on the deal.

Equinor is a special creature in a few ways. First, one of the reasons it could be an early developer of U.S. offshore wind is that it has decades of experience developing and operating offshore oil and gas assets. Other oil majors (in particular BP) can claim the same expertise, but Equinor seems particularly adept at it.

Second, the company is two-thirds owned by the Kingdom of Norway, with Norway’s Government Pension Fund Global, also known as Norges Bank, owning another 3.59% of the company via Folketrygdfondet, which is authorized to invest 85% of its funds in Norwegian companies. Not only is the government a particularly patient and committed shareholder, it also has a hand in its portfolio companies’ strategies. The Folketrygdfondet “has an interest in an orderly transition in line with the Paris Agreement” and expects that its portfolio companies “integrate climate change considerations into policies and strategy.”

So to recap: Norway reinvests its state-oil company’s revenues back into said oil company, while also helping drive said oil company’s energy transition strategy. As Equinor’s first-quarter results show, all of this effort and coordination has made it possible for an oil company to get half its revenues from renewable energy, at least for now. Other oil majors reaching for that same brass ring will have their work cut out for them, certainly—and may continue to resort to buying assets from each other in their quest to get there.