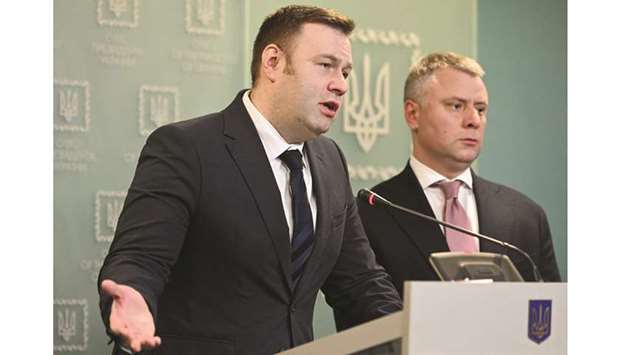 Gazprom PJSC and Ukraine reached an agreement that will allow Russian gas to flow to Europe via its neighbour through the end of 2024 and settle all of the related legal disputes.
Ukraine’s gas company, Naftogaz PJSC, will organise the transit of Russian gas through the country, with a booked pipeline capacity of 65bn cubic meters for 2020 shipments, Gazprom chief executive officer Alexey Miller said in a statement yesterday.
In 2021-2024, the booked capacities will reach 40bn cubic meters a year, he said. The companies also agreed to mull the possibility of gas transit through 2034, according to a protocol, signed late Friday evening in Minsk. An extension for the following 10 years may be on the same terms as the five-year deal, according to Ukraine’s Energy Ministry.
“The transit via Ukraine will continue and the strategic nature of the transit was understood by everyone and I believe it would help us open a new chapter in this relationship,” EU Commission Vice President Maros Sefcovic told Bloomberg yesterday.
The bilateral agreement paves the way for the continuation of Russian gas flows to Europe via Ukraine, which has been the key transit route for Gazprom even amid the legal spats and political tensions between the two nations.
It also supports Europe’s energy security as Russia has been the European Union’s dominant and often cheapest energy supplier, providing some 37% of the fuel to the region last year. The current 10-year transit deal between Russia and Ukraine expires January 1. “There are very precise deadlines until when everything should happen,” Sefcovic said. “I have no doubt that everything will go smoothly as of January 1 because there was full understanding of what needs to be done.”
Russia and Ukraine reached the deal as the US administration imposed sanctions on Russia’s future subsea gas-export pipeline, Nord Stream 2. The $11bn pipeline is just weeks away from completion, but it has faced criticism from the US, and it wasn’t immediately clear if the pipeline work can be completed without the input of AllSeas Group SA, which said it would halt operations.
Talks to find a deal between Russia and Ukraine intensified in recent days as the deadline loomed. “To be honest we have done almost the impossible in three months,” Ukraine’s Energy Minister Oleksiy Orzhel told reporters in Kiev yesterday.
Under the deal, Gazprom and Ukraine have agreed not to start any new gas lawsuits against each other and to cancel all their current legal claims that haven’t been subject to court rulings, according to Miller. The Russian gas giant will also pay to Naftogaz $2.9bn awarded by the Stockholm arbitration in 2018.
The sum includes a $2.6bn debt and fines accumulated thereafter, a spokesman for Gazprom said in a separate statement. “It is very important that these $3bn in line with Stockholm arbitration will be paid in cash if we implement all the package of proposals before year-end,” Orzhel said. At the same time Ukraine will withdraw its legal claims against the Russian company.
Last month, Naftogaz filed a lawsuit against Gazprom with a court of arbitration in Stockholm, asking to revise transit fees totalling more than $12bn.
Gazprom and the Ukrainian government are also set to sign an “amicable agreement” on cancelling an antitrust claim that has reached about $7.4bn, including fines. All the legal issues should be resolved by December 29, according to the protocol.