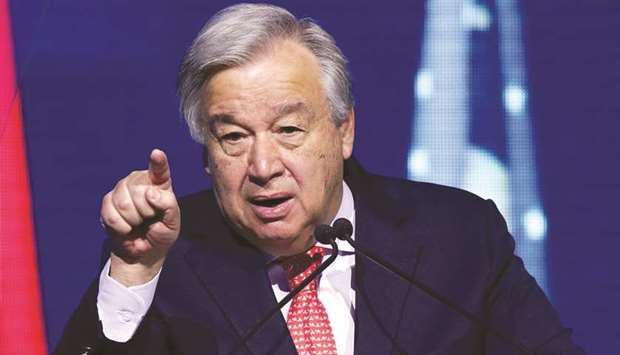 Two months ago, in his address to the United Nations General Assembly, UN Secretary-General António Guterres expressed his fear that a “Great Fracture” could split the international order into two “separate and competing worlds,” one dominated by the United States and the other by China. His fear is not only justified; the fissure he dreads has already formed, and it is getting wider.
After Deng Xiaoping launched his “reform and opening up” policy in 1978, the conventional wisdom in the West was that China’s integration into the global economy would naturally bring about domestic social and political change. The end of the Cold War – an apparent victory for the US-led liberal international order – reinforced this belief, and the West largely pursued a policy of engagement with China. After China became a member of the World Trade Organisation in 2001, this process accelerated, with Western companies and investment pouring into the country, and cheap manufactured products flowing out of it.
As China’s role in global value chains grew, its problematic trade practices – from dumping excessively low-cost goods in Western markets to failing to protect intellectual-property rights – were increasingly distortionary. Yet few so much as batted an eye. No one, it seemed, wanted to jeopardise the profits brought by cheap Chinese manufacturing, or the promise of access to the massive Chinese market. In any case, the thinking went, the problems would resolve themselves, because economic engagement and growth would soon produce a flourishing Chinese middle class that would propel domestic liberalisation.
This was, it is now clear, magical thinking. In fact, China has changed the international system much more than the system has changed China.
Today, the Communist Party of China is more powerful than ever, bolstered by a far-reaching artificial intelligence-driven surveillance apparatus and the enduring dominance of state-owned enterprises. President Xi Jinping is set for a protracted – even lifelong – tenure. And, as US President Donald Trump has learned during his ill-fated trade war, wringing concessions out of China is more difficult than ever.
Meanwhile, the rules-based international order limps along, without vitality or purpose. Emerging and developing economies are frustrated by the lack of effort to bring institutional arrangements in line with new economic realities. The advanced economies, for their part, are grappling with a backlash against globalisation that has not only weakened their support for trade liberalisation and international cooperation, but also shaken their democracies. The US has gradually withdrawn from global leadership.
As a result, international relations have become largely transactional, with ad hoc deals replacing holistic co-operative solutions. Institutions and agreements are becoming shallower and more informal. Values, rules, and norms are increasingly regarded as quaint and impractical.
This has produced a golden opportunity for China to begin constructing a parallel system, centred on itself. To that end, it has created institutions like the Asian Infrastructure Investment Bank and the New Development Bank, both of which mimic existing international structures. And it has pursued the sprawling Belt and Road Initiative – an obvious attempt to position itself as a new Middle Kingdom.
Yet many, including in Europe, are not particularly concerned about the emergence of this parallel system. So long as it brings ready access to project finance, it’s fine with them. As Europe becomes increasingly alienated from the US, many Europeans also believe that they can improve their strategic position by situating themselves on the frontier between the two emerging worlds.
That strategy may offer some advantages, including opportunities for arbitrage. But as anyone who lives on a fault line knows, there are also formidable risks: friction between the two sides is bound to shake the foundations of whatever is positioned atop the boundary.
This is especially true for the European Union, which is built on a commitment to co-operation, shared values, and the rule of law. If the EU aids in building a parallel structure that contradicts its core values, particularly the centrality of individual rights, it risks severing its meta-political moorings – the beliefs to which its worldview is tethered. A Europe adrift will eventually sink.
The solution is not for Europe simply to take America’s “side,” and turn its back on China. (That, too, would run counter to European values.) Rather, the EU must heed Guterres’s call to “do everything possible to maintain a universal system” in which all actors, including China and the US, follow the same rules.
In this sense, the recent joint statement by Xi and French President Emmanuel Macron reaffirming their strong support for the Paris climate agreement is promising, as is Europe’s growing recognition that China is not only a partner or economic competitor, but also a “systemic rival.” But this is only a start. Europe needs a robust China strategy that recognises the profound, often subtle challenges that the country’s rise poses, mitigates the associated risks, and seizes relevant opportunities.
Achieving this will require perspective and discipline, neither of which comes naturally to the EU. But there is no other choice. As soon as Europe stops defending the rule of law and democratic values, its identity – and its future – will begin to crumble. – Project Syndicate

* Ana Palacio is former Minister of Foreign Affairs of Spain and former Senior Vice-President and General Counsel of the World Bank Group. She is a visiting lecturer at Georgetown University.