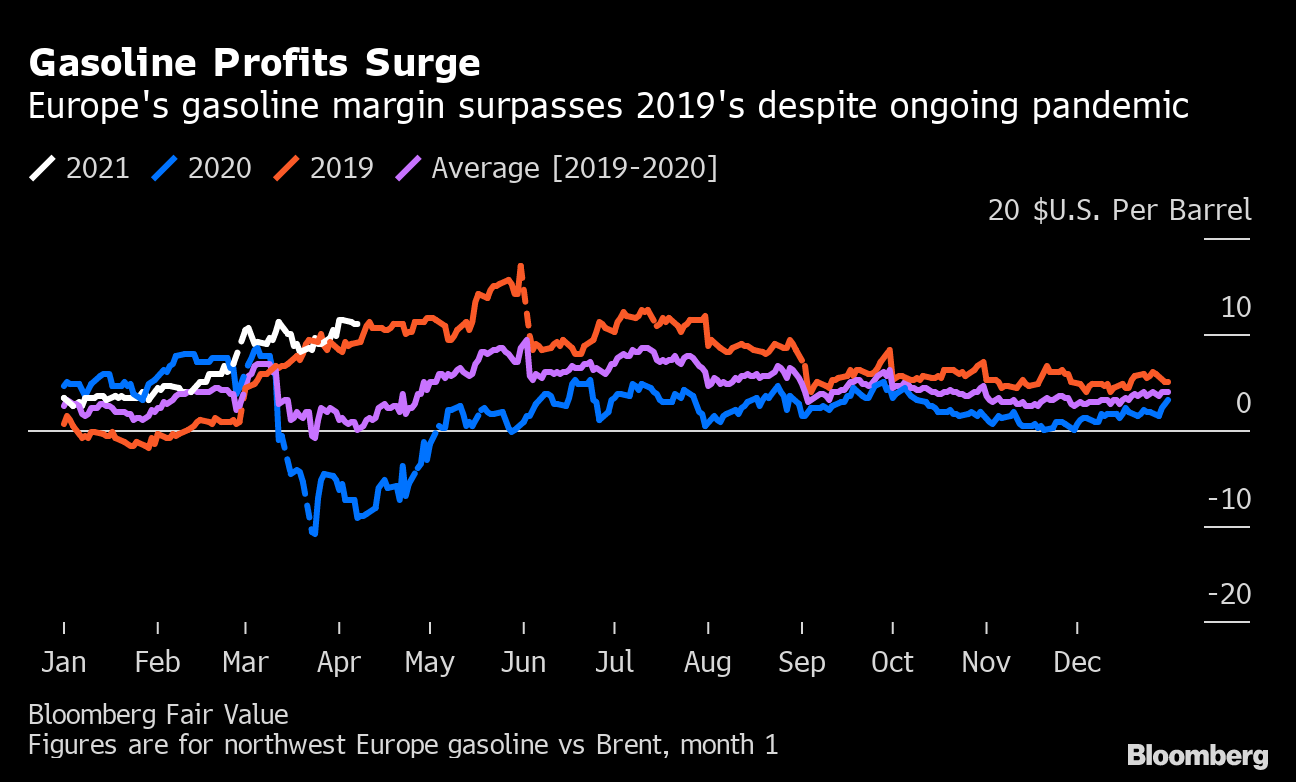 As Europeans drive less, the price they’re paying for gasoline to power their cars is moving higher as the continent’s oil refineries boost exports — but make less — of the fuel.

The so-called crack spread, the price at which gasoline trades over crude oil, hit its strongest for the time of year since 2017 at the start of April. That’s helped push retail prices to their highest in years on a seasonal basis in several of the continent’s big consumer nations including Germany, France and Italy.

At least a quarter of the gasoline-making units at northwest Europe’s oil refineries have been offline recently for maintenance, or suffered unplanned disruption. That’s further reduced output at a time when plants are processing less crude oil anyway because of the pandemic. Add in healthy exports, in particular to the U.S., and prices suggest the market has more than offset the lost demand.

“There’s a huge pull on European gasoline to other key regions,” said Mark Williams, an oil analyst at Wood Mackenzie Ltd., adding that resurgent demand in the U.S. is boosting the European market.

When Europe’s spring lockdowns came into force last year, millions of barrels of gasoline demand disappeared and processing margins sank deep into negative territory. This time that hasn’t happened, despite the continent’s latest wave of mobility-restricting lockdowns limiting road use and perpetuating weakness in two other key transport fuels: diesel and jet fuel.

European exports of gasoline to the U.S. surged by more than 60% month-on-month in March and are set to stay strong in April, according to data from Kpler, an analytics firm. Shipments to West Africa are also healthy, averaging almost half a million barrels a day in the first quarter of this year. Nigeria has also recently said it won’t phase out gasoline subsidies.

At the same time, Europe’s own supply is being squeezed with multiple gasoline-making units called fluid catalytic crackers taken offline.

Germany’s Miro refinery, which normally supplies between a quarter and a third of the nation’s gasoline, has undergone a major overhaul this spring. The U.K.’s Pembroke plant is also among refineries that reduced supply in recent weeks.

“These outages are likely not economically motivated, but more a result of scheduling,” said Koen Wessels, an analyst at Energy Aspects, noting the loss of output has been supporting margins.

The refinery disruption and high exports have helped to strengthen Europe’s gasoline market even as the continent’s road use slumped to its lowest so far this year in the week through March 28, according to transport data compiled by Bloomberg. It was down about 30% on average, compared with pre-pandemic levels.

While those forces are helping gasoline, they’re not enough to push margins for other key transport fuels back to seasonal norms. With Europe’s air traffic still more than 60% below the pre-pandemic level, refiners are still shifting jet fuel production into diesel, adding to supplies and pulling down prices.

“We could well see another few weeks of strength before refiners bring on enough capacity to alleviate the shortage meaningfully,” said Eugene Lindell, an analyst at JBC Energy, when asked about current gasoline strength. “We would expect the ample spare capacity to take care of the issue once runs are ramped up.”