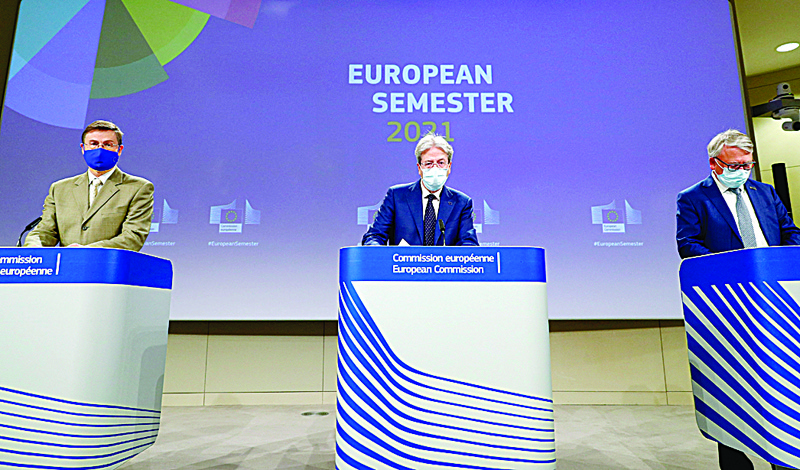 Rules against overspending by EU governments will remain suspended through 2022, leaving more time for stimulus plans to boost the economy to pre-crisis levels, the European Commission said on Wednesday.

“The recovery remains uneven and uncertainty is still high, so economic policy must remain supportive in both 2021 and 2022,” EU Executive Vice President Valdis Dombrovskis said.

The EU executive suspended the public spending rules for national governments in March 2020 as the European Union sank into its deepest recession since World War II, thanks to Covid-19 restrictions.

Based on current forecasts, “the general escape clause will stay activated in 2022 but no longer so as of 2023.”

Trailing the strong recoveries in the US and China, the economy in Europe fell into a second recession early this year and is not expected to regain its pre-crisis form until later in 2022.

The EU has been criticised for doing less to boost its economy than other powers, but has pinned its hopes on a 750 billion euro recovery programme, whose effects should begin to kick in later this year.

Known as the Stability and Growth Pact, the EU’s spending rules limit deficit spending at three percent of the overall economy and debt at 60 percent.

The rules are often violated but, while countries in theory risk penalties for ignoring them, no government has ever been sanctioned.

The limit on debt is often overshot even in normal times and 13 countries are currently above the limit including Italy, Spain and France where debt is over 100 percent of GDP.

The pact mainly empowers the EU executive and fellow member states to keep a careful eye on how national governments run their budgets.

The commission, with the backing of the member states, also signals what reforms need to be carried out in order to get a thumbs up from the EU.

The fiscal rules are however quite controversial, with several member states complaining that they are ineffective and outdated.

There is also an argument over the actual danger of running a high debt when the financial markets seem to be unbothered by the public debt piles in countries like Italy, France or Belgium.

The EU-27 are committed to reforming the pact, with some hopeful that this will be done before the end of the suspension, which is now most likely on January 1, 2023.

But Gentiloni warned that reforming the rules will be highly controversial, with the so-called “frugal” countries in the north of Europe reluctant to show leniency to their southern, more indebted neighbours.

“We will work very strongly for this goal but when I’m saying that it is not an easy one, I am only telling the truth,” he told reporters.

The Barron’s news department was not involved in the creation of the content above. This story was produced by AFP. For more information go to AFP.com.
© Agence France-Presse