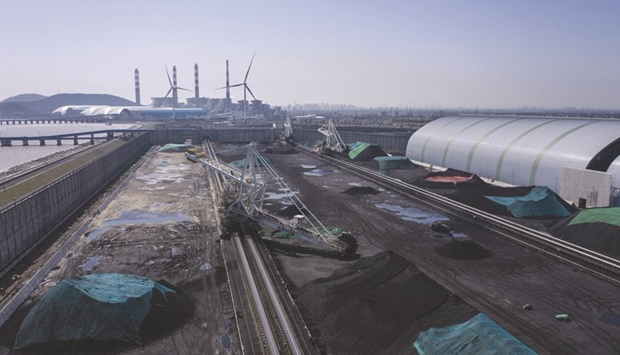 China is building a vast array of new coal-fired power stations, potentially more than the operating capacity of the US, even though it knows the plants will probably never be fully used.
The puzzle of why the world’s leading installer of clean energy is investing so much in the worst polluting — and increasingly expensive — fossil fuel shows the depth of Beijing’s concern over the global squeeze in energy supplies. But it also reflects planning for a gradual relegation of coal’s role, from prime power source to a widely available but often idle backup to China’s rapidly expanding renewables fleet.
Work on at least 165 gigawatts of plants powered by coal should begin by the end of 2023, the National Development and Reform Commission told executives at a meeting in September, according to state-backed Jiemian News. The chairman of China Energy Engineering Corp, meanwhile, has forecast the country could add a total of 270 gigawatts in the five years to 2025 — more than currently exists in any other nation.
New coal permits have already increased, and while the final extent of the ramp-up isn’t known, adding 270 gigawatts could cost 568bn to 766bn yuan ($79bn to $106bn), according to a calculation based on BloombergNEF data. Excluding China, the rest of the world’s pipeline of coal power projects stands at about 101 gigawatts, data compiled by Global Energy Monitor show.
China’s strategy is designed to avoid the pitfalls that have hobbled parts of the US and Europe, which stopped investing in fossil fuel production and infrastructure before renewables were ready to take over. That’s led to an over-reliance on imports in some places, and in others a dependence on grids that can fall prey to the unreliability of sunshine and wind.
At the recent party congress, President Xi Jinping laid out how China’s energy transition would be different by following “the principle of building the new before discarding the old.” In practice, that means adding both clean power and more coal to try and eliminate economy-crippling power shortages and create a buffer against volatile global fuel prices, while at the same time advancing the country’s long-term climate goals.
As China’s economy grows, it requires ever more power, and it has said it plans to peak coal consumption only by the middle of the decade.
But even as new plants are built, the intention is for them to be used less and less as they’re displaced by increasing amounts of clean energy.
In the context of global energy insecurity, it’s not surprising that China would ramp up its coal capacity, said Yan Qin, an analyst in Oslo, Norway, at Refinitiv. “But the push to add more clean energy to the grid hasn’t slowed down, meaning that growing renewables will squeeze the running hours of coal plants,” she said.
The plan carries big risks. Coal financiers are directing capital to investments that are almost designed to be stranded. If they protest because their projects are being underutilised, it could slow the decarbonisation of the planet’s worst polluter. And the world’s carbon budget is finite, which means that any coal burned at all in China increases the chances of missing targets to avoid catastrophic warming.
The NDRC’s proposal is already facing some pushback from utilities and local lenders, according to a person familiar with the matter. Many coal power generators are losing money amid high fuel prices and aren’t enthusiastic about funding and running plants that would only be used during times of peak demand, the person said, declining to be identified because the talks are private.
Still, it’s clear that the regulator’s tone on coal power has changed since last year’s energy crisis, according to the person. More plants will be built in areas that are reliant on hydropower, and near the massive wind and solar farms being built in the desert interior, to ensure reliable supply when intermittent renewables generation stalls, the person said.
China is also making efforts to lessen the burden on coal power generators, in large part by leaning on miners to boost output to record levels and keep the Chinese market well below sky-high international prices. The government has also given utilities leeway to charge higher rates to industrial customers. And, it’s making progress in developing a mechanism that would compensate coal plants that sit idle while on backup duty, Refinitiv’s Qin said.
In any case, the rate at which clean energy is added will probably be more instructive than power plant spending in determining when coal burning starts to dwindle, said Dave Jones, a lead analyst at the climate think tank Ember in London.
Once renewables are installed they’re basically free to produce, which means they’ll be prioritised over coal. The moment that new clean energy generation outpaces new power demand is when coal use begins to fall, he said.
China is by far the world’s largest renewables market, and its expansion continues to accelerate. Spending in the first half of this year more than doubled to $98bn, compared to $12bn in the US. As wind, solar and hydropower all charted strong growth over the period, mostly coal-based thermal power generation dropped 3.5%.
Although the historic drought in the summer curtailed hydropower so much that coal is back on track for a year-on-year increase, it won’t be long before new clean energy capacity puts the fuel into permanent decline, Jones said.
“There is so much wind and solar being built and generating clean electricity,” he said. “As long as China’s not inventing a whole new use for thousands of terrawatt-hours of power, then from a demand perspective it’s got to be reducing coal power, because there’s nowhere else for that electricity to go.”