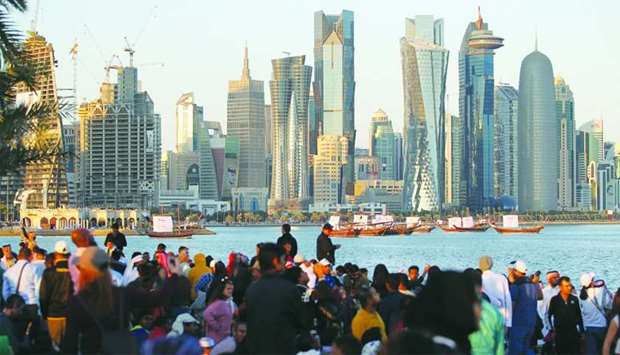 The expected commissioning of Barzan natural gas facility could support domestic gas production and contribute positively to Qatar’s growth, Lloyds Bank has said in an overview.

In the medium term, the expansion of North Field gas projects is expected to be completed by 2024, further boosting gas output, it said.

Qatar has been implementing an economic diversification programme to lower its dependency on the hydrocarbon sector, and in December 2018 the country announced it would leave Opec (Organisation of the Petroleum Exporting Countries) in January 2019 to focus its efforts on natural gas.

New projects are planned in infrastructure and telecommunications, and various construction projects are in progress in preparation for the World Cup in 2022. Inflation was estimated to have fallen to -0.6% last year from 0.2% in 2018, Lloyds Bank said.

IMF estimated inflation to decrease to -1.2% in 2020 and increase to 2.4% in 2021 in its latest World Economic Outlook of April 2020; indeed, Qatar has postponed plans to introduce a VAT to 2021 the earliest, suggesting inflation will continue to remain weak this year.

Qatar’s economy started to grow faster after the first quarter of 2019 as government spending rose, particularly with regards to wages in the public sector. This helped boost the economy later in the year, which had showed signs of a slowdown as most major infrastructure and construction projects in relation to the World Cup came to completion, it said.

Nonetheless, general government debt was also estimated to have grown to 53.2% of GDP in 2019, from 48.6% a year earlier, as the country continued to borrow in international markets.

However, the IMF expects this trend to be heavily affected by the negative economic impact of the Covid-19 pandemic and the fall in oil prices. The current account balance should be negative in 2020 and 2021 (-1.9% and -1.8%, respectively), Lloyds Bank said.

Qatar is the world’s leading exporter of liquefied natural gas and holds the third largest gas reserves in the world (estimated at 16% of the global total). The country’s economy is thus heavily concentrated in the gas industry, which represents two-thirds of its GDP and almost 80% of export earnings.

Like other Gulf countries, Qatar has been hit by the global decline in oil prices since 2014.

“However, the economic results have been better than that of its neighbours, due to successful economic diversification, namely via the development of large-scale projects,” Lloyds Bank said.