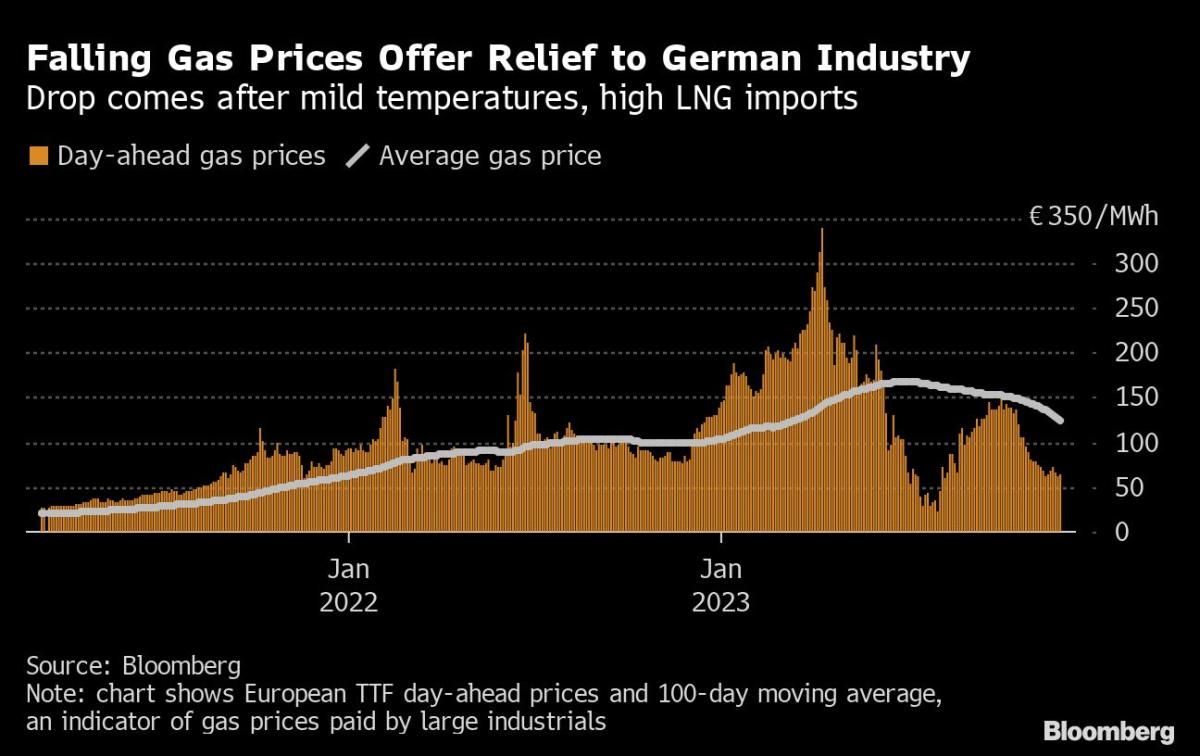 By William Wilkes
Germany’s industrial heavyweights like BASF SE battling an unprecedented energy crunch are seeing signs the worst of the crisis has passed.

Fears of gas rationing after Russia’s invasion of Ukraine have dissipated for the country’s chemicals, metals and glass makers amid mild temperatures and Germany completing its first liquefied natural gas import terminal. Companies switching to purchasing gas and electricity in the spot market instead of long-term agreements are already reaping the benefits.

Energy prices are significantly lower for us,” said Christopher Profitlich, a spokesman for SKW Piesteritz GmbH, which was forced to halt production of key base chemical ammonia last year after gas prices surged. “Both our machines are working and all of our production staff are working again.”

Germany’s pivot to wean itself off Russian gas is paying off. The government has rushed to tap liquefied natural gas in the market, boosting imports to Europe to a record high and keeping reservoirs close to full through the early winter. The country has also fast-tracked building LNG terminals.

“It looks like the risk of forced gas rationing has gone away this winter,” said Wolfgang Große Entrup, who heads Germany’s VCI chemical sector association. “But prices will need to stay lower for much longer for most companies to see a real difference.”

The surge in gas prices forced many industrial companies to curb output, stoking fears for the furture of factories and jobs. Major manufacturers including automaker Volkswagen AG and chemical giant BASF drew up emergency plans in case of supply disruptions, as Russia effectively stopped direct gas flows since September.

While prices have started to wane, they remain significantly above levels seen before Russia started under-delivering gas in the months before its February 2022 invasion. Companies dealing with the price shock said customers in many cases have turned elsewhere, such as sourcing aluminum parts from the US or Asia.

“The feeling of apocalypse has lifted,” said Marius Baader, managing director of Aluminium Deutschland which represents aluminum manufacturers, said by phone. “But there’s no reason to celebrate yet.”

The drag on Europe’s biggest economy has also eased. Economists had predicted a downturn in September after measures of consumer confidence dropped and surveys of purchasing managers signaled a decline in output. Now the broader economy appears to be flatlining rather than shrinking.

“The currently stable energy supply situation ensures that production is secured for the time being,” said Matthias Frederichs, head of the BV building materials manufacturers’ association. “Still, there can be no talk of relief.”