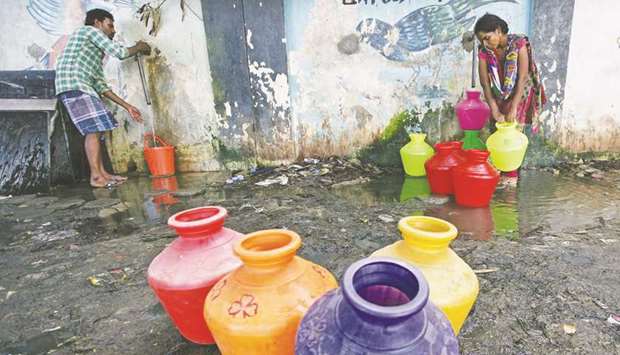 Population growth and climate change are putting increasingly intense pressure on the planet’s limited water supplies, with worsening shortages emerging from the Middle East to Asia and Latin America, researchers and bankers said on Monday.
“All the local crises around the world are building up to a global crisis,” Torgny Holmgren, executive director of the Stockholm International Water Institute, told a conference on the issue at London-based think-tank Chatham House.
But easing the threat and ensuring more people have access to a stable, safe water supply will be hugely challenging because water access and distribution are tied up in politics, cultural views and entrenched systems, conference speakers said.
In Jordan, the third most water-scarce country, raising water prices to reflect the shortage would make economic sense — but not when nearly 1.5mn Syrian refugees, on top of 9mn citizens, depend on it, said Craig Davies of the European Bank for Reconstruction and Development (EBRD).
“It’s potentially a powder keg,” said Davies, who heads climate resilience investments for the bank. “From a political point of view, it’s imperative to keep water tariffs very low.”
Uzbekistan, meanwhile, has built its economy on exports of thirsty cotton, something that might not make sense as water becomes more scarce.
But “you can’t adjust that very easily” without upsetting farmers and the economy, Davies added.
In North Africa, newly available solar-powered water pumps are giving drought-hit farmers crucial access to irrigation — but also removing incentives to use water sparingly as farmers no longer have to buy fuel for diesel-powered irrigation pumps.
“There is literally no control,” said Annabelle Houdret, a senior researcher at the German Development Institute who works in the region.
Aquifers there could be depleted, she warned.
In many Islamic countries, water is seen as a human right and a gift from God, so asking governments to charge people for better water services can be complicated, Davies said.
In most places the EBRD works, the price users pay for water is far below the actual cost of bringing it to them, he said, meaning there is often too little money to invest in treating and delivering water, and maintaining and expanding networks.
“If you’re not paying a rational price for the water, the incentive is to use the water irrationally,” he added.
Getting water use right in an increasingly parched world is crucial, said Olcay Unver, vice-chair of UN-Water, a co-ordinating agency on water issues for the United Nations.
Three out of every four jobs globally depend on water in some way, including small-scale farmers who produce 80% of the world’s food, said Unver, who is also a water advisor for the United Nations Food and Agriculture Organisation (FAO).
By 2050, FAO estimates food demand globally will rise by 50% but “we don’t have 50% more water to allocate to agriculture”, he noted, adding it is already the dominant water user.
Demand for water is also surging in fast-growing cities, where more than half of people live now and over two-thirds are expected to live by 2050, Unver said.
Getting enough water to everyone is particularly difficult as climate change brings more erratic rainfall, with many places hit by floods and droughts in turn, conference speakers said.
But some countries are coming up with innovative ways to protect or expand supplies.
In India’s Gujarat state, for instance, much of the year’s rain comes in monsoon season — and then rapidly evaporates, said Gareth Price, a Chatham House senior research fellow who works on South Asia.
But some farmers have begun gathering leftover straw after harvest and piling it in low-lying spots in their fields to absorb and hold excess rain, allowing it to slowly filter into the groundwater, he said.
The innovation — which also helps cut down on burning of field stubble, a major source of air pollution in the region — has won World Bank funding for its expansion, he said.
In Brazil, meanwhile, farmers and ranchers who preserve and plant more forests along rivers to protect water supplies are paid by downstream users under a “water producers” programme, said Paulo Salles, director of a Brazilian water regulatory agency.
Daanish Mustafa, a geography professor at King’s College London, said growing water scarcity would unlikely drive a surge in wars, but instead lead to more “unjust co-operation” — cross-border sharing pacts where the stronger party gets the better deal.
Water access is already hugely unequal, speakers said, with US residents using 700-900 litres a day, Europeans about 200 litres and many of the world’s poorest just 10-15 litres.
Reliable access to water is crucial to achieving many of the global sustainable development goals (SDGs) — from ending poverty and hunger, to reducing inequality — they added.
Yet climate change threatens to put secure water access ever further out of reach.
“With the SDGs, we can see the light at the end of the tunnel — but the problem is it’s almost certainly a climate change train coming,” said Christopher Hurst, director general of projects for the European Investment Bank. — Thomson Reuters Foundation