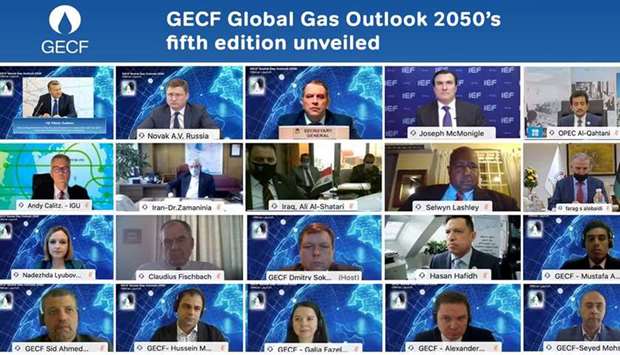 Global natural gas production is forecast to grow by around 1,900bcm to reach more than 5,900bcm by 2050, Dohabased GECF said yesterday. Total investment in gas (including upstream and midstream activities) between 2020 and 2050 will reach a cumulative $10tn, the Gas Exporting Countries Forum said, unveiling its 2020 edition of the ‘Global Gas Outlook 2050’ yesterday. The GECF said in Asia-Pacifi c, only China, Australia and India are expected to signifi cantly expand production.

Europe’s downward trend is expected to continue with production falling from over 200bcm in 2019 to around 70bcm in 2050. Africa will grow from 250bcm (6.4% of global production) in 2019 to around 600bcm (just over 10% of global supply) by 2050. Natural gas production in Latin America is expected to increase by over 110bcm to reach 280bcm by 2050. The ‘Global Gas Outlook 2050’ revealed that energy transition is underway and natural gas together with renewables will gain in importance and will be the major contributors to incremental growth in global energy demand, together accounting for more than 90% of the additional 3,520mn tonnes oil equivalent (Mtoe) through to 2050.

The Forum said natural gas and renewables will make up 60% of the electricity supply, changing the global power generation mix by 2050. Natural gas, it said, will overtake coal in 2025 and become the largest global primary energy source by 2047, with oil plateauing around 2040 and then beginning its irreversible decline. According to the GECF, renewables’ share in the global energy mix will rise from 2% in 2019 to 10% in 2050.

Natural gas demand will rise by 50%, reaching 5,920bcm in 2050, and will expand specifi – cally across the Asia Pacifi c, North America and Middle Eastern markets, which together will provide more than 75% of additional gas volumes through to 2050. The Asia Pacifi c region, given its enormous potential, will become the largest gas consumer, doubling its consumption to 1,660bcm by 2050. The share of traded LNG will increase to approximately 48% of all traded gas in 2030 and 56% in 2050, respectively, the GECF said. LNG regasifi cation from existing, under construction, potential, proposed, stalled and speculative projects is expected to be around 1,398mtpy.

It is projected that over the outlook period, 1,990bcm out of around 5,920bcm global natural gas demand will be imported, including 1,105bcm from the GECF member countries. In his overview of the latest fi ndings of the Outlook 2050, GECF secretary general Yury Sentyurin highlighted the vital role natural gas will play in the global energy mix by raising its share from currently 23% to 28% by 2050, thanks to its remarkable features of abundance, fl exibility, aff ordability, and environmental effi ciency. Sentyurin said, “The complexity of factors and the multiplicity of stakeholders within the energy sector results in myriad shifting strategies that are shaping the new architecture of the future.

Nevertheless, the mid- and longterm fundamental factors that favour natural gas remain unchanged. This plentiful, adaptable and, crucially, clean source of energy will expand across Asia Pacifi c, North American and Middle Eastern markets.” The GECF Global Gas Outlook 2050 was launched at an online event attended by energy ministers and senior representatives from the Forum’s member countries together with a bevy of dignitaries and gas industry stakeholders yesterday. Its detailed quantitative assessments account for national energy strategies, environmental and climate policies, and investments and business decisions. The forecast remains the fl agship publication of the association of 19 member countries, which together represent 70% of the world’s proven gas reserves, 44% of its marketed production, 52% of pipeline, and 51% of LNG exports in the world.